India are going to play their first-ever Day/Night Test about four years after Australia and New Zealand played the pink-ball Test in 2015. 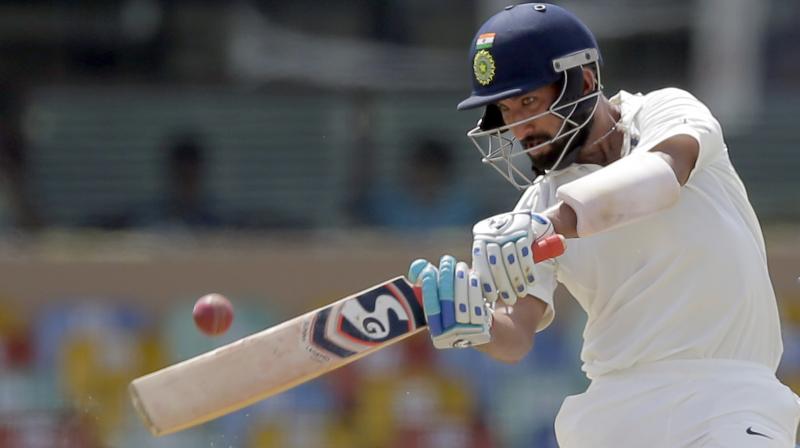 Cheteshwar Pujara said the pink ball could pose some problems during the twilight period. (Photo: AP)

Kolkata: Cheteshwar Pujara can't wait for India's first-ever Day/Night Test despite all the talk of it being a challenge as he is confident that the country's formidable batting line-up will have no trouble adapting to the pink ball.

The prolific batsman topped the run charts (453) with two daddy hundreds, including a 256 not out for India Blue in the Duleep Trophy more than three years back when pink ball was experimented with for the first time by the Sourav Ganguly-led BCCI technical committee.

Now, after taking over as the BCCI president, Ganguly has convinced the Bangladesh Cricket Board and both the countries will play their maiden pink-ball Test at Eden Gardens from November 22-26. Former players, including the great Sachin Tendulkar, have spoken about the multiple challenges like dew while playing in the evening.

"It's going to be exciting...What we played was a first-class match, this is going to be a Test match. I'm sure all the players are excited about it," the Indian Test No.3 told PTI in an exclusive interaction.

Pujara said the pink ball could pose some problems during the twilight period.

"In the twilight period, I feel that maybe, sighting the ball could be a little challenging. (But) the more you play, you get used to it. It's always about experience and knowing how the ball is behaving," he said.

Pujara had complained about sighting the ball under lights in the 2016-17 season but he claims to be better prepared now.

"The more we play, the more we gain experience of how to tackle the ball. Every ball has its challenges. I don't think it will require a huge change to shift from red ball to the pink ball. The reason is it's the same format. We are still playing a five-day match," the 31-year-old said.

"Yes, under lights, it will be different. But it's about getting used to the pink ball. That's what I feel. Rest, I don't think will be a major difference. Once we play some Test matches, we will be able to know the exact difference and can improvise."

Apart from Pujara, Mayank Agarwal, Rishabh Pant, Kuldeep Yadav, Mohammed Shami and Wriddhiman Saha, from the current Indian Test squad, have the experience of playing with a pink ball at the domestic level.

Summing up the mood in the camp, he said: "We won't' have any issue. Most of the guys have played in Duleep Trophy and for the ones who have not played, it would be a good learning curve for them."

"The help for the bowlers could come at a different time, unlike the traditional Tests. It could be under lights or without lights. Once we play, we will get to know about all such things. We will have to adapt to it as quickly as possible."

India are going to play their first-ever Day/Night Test about four years after Australia and New Zealand played the pink-ball Test at the Adelaide Oval on November 27, 2015.

The pink-ball innovation has been seen as the future of the Test format which is battling to keep the spectators' interested. India were reluctant to play Day/Night Tests and backed out against Australia in the 2018-19 season.

Pujara, however, is not sure whether the innovation in the longer format is going to be the future.

"It's too early to say. Once I've some experience I will be able to say," he said.

Pujara seemed more concerned about winning the match and the series as 120 points would be up for grabs in the two two-game series.

"Pink ball or not, the format still remains the same. We would want to win as many matches as possible because points are at stake. Whether it's a red ball or pink ball, ultimately you have to play well and win the game," he said.

The Mumbaikar smashed a double hundred to go along with two centuries, while Agarwal also struck a double and a hundred in the series against South Africa.

"It's a big bonus for us that Mayank and Rohit both are scoring runs. We want them to keep scoring runs. Our batting lineup also becomes strong. If the openers are giving good starts, then the No.3, 4 and 5 have that luxury to bat accordingly," he said.

The Indian run machine is due for a big knock having got out for 81 (Vizag) and 58 (Pune) in the recently-concluded South Africa Test series and he hoped a big hundred would come soon.

"You don't have to put pressure on yourself and at the same time you have to keep working on your game, keep getting better," he asserted.