Faf Du Plessis says he has 'learnt' lessons from 2015 tour

South Africa had no answer to the spin duo of Ravichandran Ashwin and Ravindra Jadeja, losing the four-match series 0-3. 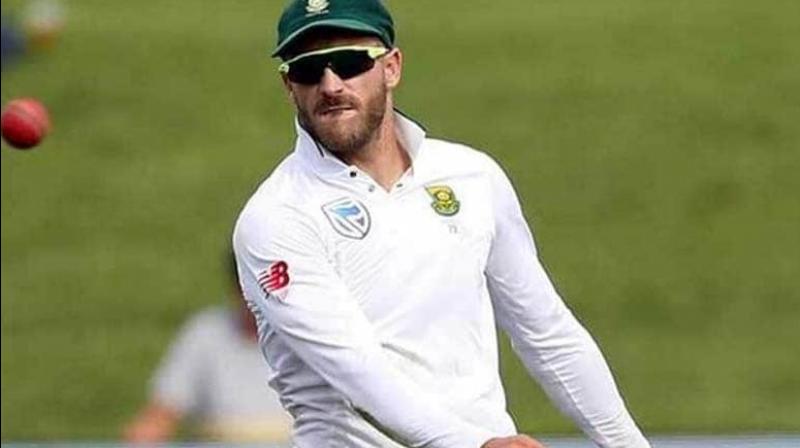 South African captain Faf du Plessis has 'learnt' his lessons from the disastrous tour of India four years ago and hopes the team's young members will emerge as improved cricketers after the current Test series, beginning on Wednesday. (Photo:AFP)

Visakhapatnam: South African captain Faf du Plessis has "learnt" his lessons from the disastrous tour of India four years ago and hopes the team's young members will emerge as improved cricketers after the current Test series, beginning on Wednesday.

South Africa had no answer to the spin duo of Ravichandran Ashwin and Ravindra Jadeja, losing the four-match series 0-3. Du Plessis himself had a tough time, scoring just 60 runs in seven innings.

"What Test cricket in general does to you is if there is a flaw in your game, it exposes it. Obviously last time we came here as a batting unit and personally myself found it difficult in tough conditions. The fact is that I needed to get better from a defensive and technical point of view to adapt to play in tough conditions," Du Plessis said on the eve of the first Test.

He is among the five squad members who had toured in 2015. The other four are Kagiso Rabada, Dean Elgar, Temba Bavuma and Vernon Philander who played just one Test before getting injured.

"It was tough for everyone, but it was huge value for me. After that I started playing spin better. So I think all players have to go through tough times to make them better and understand where their potential weaknesses are. And then either you can disappear or come back stronger."

It is a fresh bunch of players helped by an Indian in Amol Muzumdar, who is South Africa's batting coach for the Test series.

Time is limited but du Plessis said getting local help can only benefit the team.

"It is a different language, different mindset and it is really refreshing to have someone with local knowledge. He has been with us for a short time and we already have had some good conversations.

"The wickets spun more last time, this time it is not expected to turn as much. It was really dry back then and we struggled despite having an experienced line-up and now we have a young looking line up, so there is no baggage.

"These youngsters are motivated to do well in international cricket and this tour will be no different for them," he said.

The series against India will be South Africa's first in the World Test Championship. Following a disappointing World Cup campaign, the team is back on the road and also play England and Australia in the next six months. Du Plessis is looking forward to the challenge.

"It is a good time to be involved with a young team. A lot of senior players are out and leadership group has changed completely. Time to grow new leaders, the next set of pacers, the next Hashim Amla. I am excited about that."

With Philander amongst the runs in the warm-up game, South Africa are looking at playing five bowlers for the first Test.

"That is definitely one of the options. India has always been a place where you can score in the first innings but in the second innings, it can get challenging and you need ample bowling resources for the first innings.

While South Africa struggled against the spinners last time around and are expected to have a tough time again, du Plessis feels their number one spinner Keshav Maharaj can trouble the high-profile Indian batting.

"In the past teams visiting India used reverse swing and extra pace to their advantage. Last time here we felt the ball spun quite a bit and the spinner we have in Maharaj is as good as anyone in the world. He would just be much as a challenge for Indian batters.

"Yes we do have some pace but is about having accurate pace. In subcontinent just pace itself doesn't count for much. You need to be accurate for a long time and make sure that ball does something through the air."