Australia white-washed the English side in the three-match ODI series before the one-off Test ended in a draw. 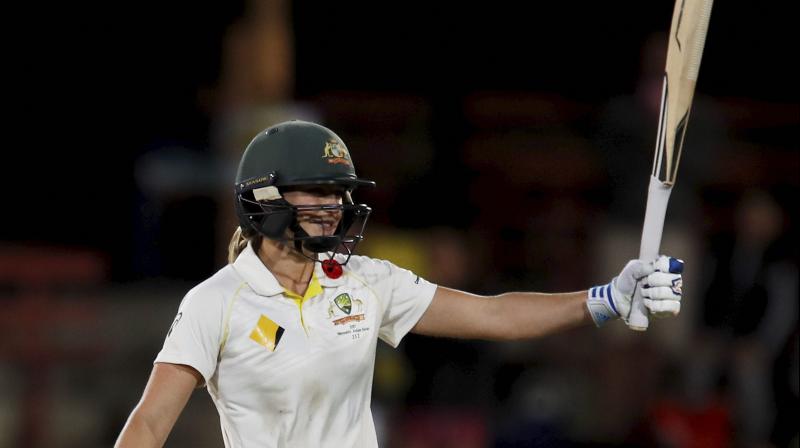 Perry was the highest run-getter in the series with 377 runs and took 15 wickets. After the final T20I, she was named as the player of the series. (Photo: AP)

Melbourne: Australia women have clinched the multi-format point-based Ashes against England and Ellyse Perry is elated over winning the series as she termed it a 'special tour'.

"It's really nice to be recognised in that manner but even nicer to be taking the Ashes home with us - as far as I'm aware in our most dominant display since multi-series format. It's been a special tour for us. In the grand scheme of things we have been brilliant this series," Cricket.com.au quoted Perry as saying.

Australia white-washed the English side in the three-match ODI series before the one-off Test ended in a draw. Australia then won the T20I series by 2-1 and after the conclusion of the series, the points tally stands at 12-4.

Perry was the highest run-getter in the series with 377 runs and took 15 wickets. After the final T20I, she was named as the player of the series.

Australia faced their first defeat in the series in the final match of the series. England won the third T20I by 17 runs after the visitors failed to chase the target of 140 runs.

"We had a quick moment after the game to recognise that in the same vein - in the same way, you're only as good as your last game. It feels like we missed a trick tonight. But England are a very good side ... in some ways it's a nice reminder we have to keep working to make sure we're still dominant when it counts," she said.

"We are keen to recognise what is a special series for us with contributions across the board and we're away from home, so there's a lot of reasons to celebrate tonight," Perry added.