Sports   Cricket  01 Jul 2019  We made it clear that Shankar will be our number four batsman, says Rohit Sharma
Sports, Cricket

We made it clear that Shankar will be our number four batsman, says Rohit Sharma

Shankar was all set to play against England, but the last moment toe issue ruled him out and Rishabh Pant was given a go in the team. 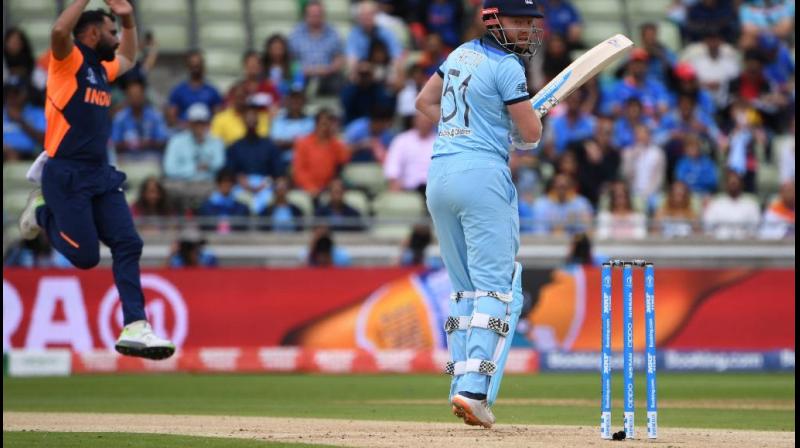 Chasing 338, India's innings got off to a slow start as the team was not even able to score 40 runs in the first ten overs. Sharma, however, said that the credit needs to be given to the England bowlers. He even defended MS Dhoni and Kedhar Jadhav for their baffling approach in the death overs. (cricketworldcup/twitter)

Birmingham: After losing their first match in the ongoing ICC Men's Cricket World Cup against England by 31 runs on Sunday, India's opening batsman Rohit Sharma said that the number four batsman issue is not a big one and went on to say that the team made it clear that Vijay Shankar would be given a consistent run in the team.

Shankar was all set to play against England, but the last moment toe issue ruled him out and Rishabh Pant was given a go in the team.

"There is no uncertainty. We made it pretty clear at the start that Vijay would play at number four. He got a toe issue before the start of the match. Every team has two/three unsettled players. There will be one or two changes happening now and then, otherwise, we are confident," Sharma told reporters at the post-match conference.

Chasing 338, India's innings got off to a slow start as the team was not even able to score 40 runs in the first ten overs. Sharma, however, said that the credit needs to be given to the England bowlers. He even defended MS Dhoni and Kedhar Jadhav for their baffling approach in the death overs.

"When you lose matches, there will be questions that why we lost the game? We lost Rahul pretty early, England bowled really well in the first ten overs. It was important that guy who's in form goes on to convert his start. We knew the longer we bat, we will have more chances of winning the match. The pitch got really slow at the end and English bowlers bowled really well in the death overs," Sharma said.

After the loss, Indian skipper Virat Kohli also played down team's loss and said England deserved the win as they were more clinical in all the departments.

"Every team has lost a game or two. No one likes to lose but you have to accept it and understand that opposition played better. They were more clinical in terms of their execution. We will have to accept that and we are still playing good cricket," Kohli said at the post-match ceremony.

India's spinners failed to leave a mark in the match against England as they were smashed around the park by England batsmen. Sharma opined that any player can have an off day and the English batsmen needed to be lauded for their approach.

"It's always challenging for a spinner when you don't have any wicket down. When Kuldeep and Chahal came to bowl, England were already off to a good start. It was just an off day for these two."

He even said that chasing such a big target requires the team to have an X factor, saying Hardik Pandya's dismissal proved as a turning point.

"There were two right-handers batting for the majority of England batting. When a team gets off to a good start, it's not easy for the sixth bowler to just come on and bowl. It just depends on how the game is going. We thought today was a day in which we thought we couldn't use the sixth bowler option," Sharma said.

"There is a lot of pressure when you are chasing a big score. We needed to create good partnerships, we just managed one. When you are chasing 340, you need an X-factor inning. Hardik was looking good but unfortunately he couldn't go on," he added.

In the match between India and England, the latter won the toss and opted to bat first. England went on to post a challenging score of 337 runs for the loss of seven wickets in the allotted fifty overs.

Jason Roy and Jonny Bairstow gave England solid base at the top as they stitched together a partnership of 160 runs. Roy was dismissed for 66 whereas Bairstow went on to score a century.

Bairstow was sent back to the pavilion after playing a knock of 111 runs, but Ben Stokes played a 79-run innings to propel England to more than 330 runs.

But India fell short by 31 runs in the end. This win has enabled England to reach the fourth spot in the tournament standings.

India will next face Bangladesh on July 2.