ICC CWC'19: Woes for India if Kuldeep, Chahal have bad day together: Panesar 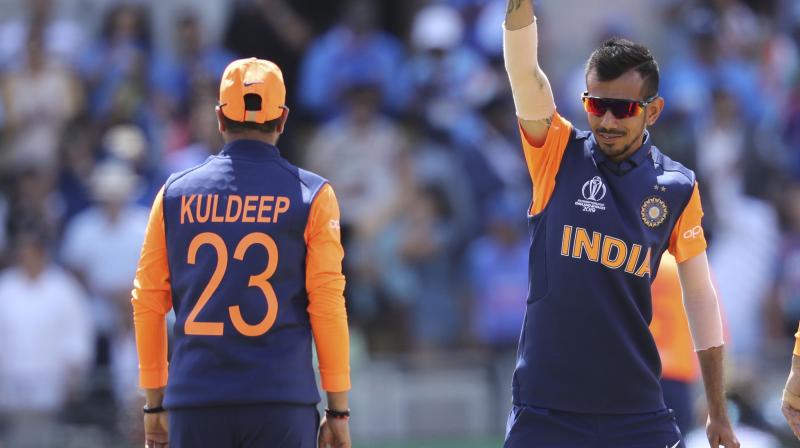 Kuldeep and Chahal, India's famed wrist spin duo, were hammered for 160 runs in their combined 20 overs on Sunday, with the Haryana leg-spinner's 0/88 in 10 overs being the worst figures by an Indian bowler in the World Cup. (Photo:AFP)

Kuldeep and Chahal, India's famed wrist spin duo, were hammered for 160 runs in their combined 20 overs on Sunday, with the Haryana leg-spinner's 0/88 in 10 overs being the worst figures by an Indian bowler in the World Cup. India lost the match by 31 runs in a chase of 338.

"I guess, they are going to have a bad day at some point in time. It shows when both don't bowl well in tandem then India can't go the distance," Panesar told PTI during an interview.

"For India to do well, it is crucial that at least one of the two spinners perform in all the games. If both do well, it's great but today was a great example when England batsmen got on top of them from the start," said Panesar, who played 50 Tests for England, picking up 167 wickets.

Panesar then explained how Bairstow and Roy's relentless attack upset the rhythm of the two wrist spinners.

"Bairstow and Roy were fearless. They took nice big strides, had strong base (balance) and anything flighted, they just went at it. They weren't scared of the flight and took the aerial route," said Panesar, one of the architects of England's 2012 Test series win in India.

The shorter boundaries and the reverse sweeps did play a huge role, said Panesar.

"I know as a spinner, it makes it so difficult. Then (Ben) Stokes came in and played those 360 degree shots," he said, referring to the 59-metre boundary on one side.

"You start thinking, 'Oh, should I put two covers or one cover? Do I place a mid-wicket to stop a single or put one at the cover boundary'?"

"Once you get smashed, you enter that phase of 'Shall I do this or shall I do that, go to the captain for advice', it disturbs your rhythm. Then you tend to go flatter, and that's when batsmen go on top," he explained.

"I have been very surprised by Afghan spinners, who adapted really well to the conditions. They have been the most potent threat after the Indian spinners. I am a bit disappointed with Rashid (Khan), of what he has done in the previous few one-dayers.

"But I guess leg-spinners will always play a role because of the pace on the ball, it is hard to put through at times."

Panesar said lesser variation is one reason while other factor is that batsmen tend to go for the jugular in the final 10 overs.

"Shakib and Jadeja are two best left-arm spin bowling all-rounders but it's just that I think teams go with leg-spin as it gives us a bit of more option. The ball turns both ways as you can use it to defend or control one area. Fingers spinners in the last 10 overs will probably go the distance (getting hit)," he explained.

Among the pacers in the tournament, Australia left-arm quick Jason Behrendorff has caught his eye as he is bowling the ideal length, Panesar said.

"Behrendorff is showing everyone in this World Cup as to what lengths one should bowl. The length in England that you need to bowl is not the usual top of the off-stump stuff but it is the three quarters," he said.

"When you hit three quarters, there is a chance for balls to skid through and then it has a chance of hitting the stumps. That's what Behrendorff is doing."

Panesar considers the current Australian attack led by Mitchell Starc along with Pat Cummins and Josh Hazlewood a real threat for the Ashes, which starts August 1, but wants Behrendorff to be included in that squad too.

"To be honest, Australia's bowling this time round has been a lot stronger compared to the last Ashes. Starc is bowling really well but this new guy, I would be surprised if they don't pick him in the Ashes squad," Panesar said referring to Behrendorff.

He has been promoting his autobiography 'Full Monty' and is now in a good mental space to start playing competitive cricket again. At 37, a few years of county cricket is what he is looking at.

"My book 'Full Monty' is doing well. It is helping me talk about my stories. I am mentally and physically fully fit now and I want to play some professional cricket as I think I still have a lot to offer. Any of the 18 counties, I would love to play."