ICC CWC'19: 'Will play according to our plan against India', says Mashrafe Mortaza 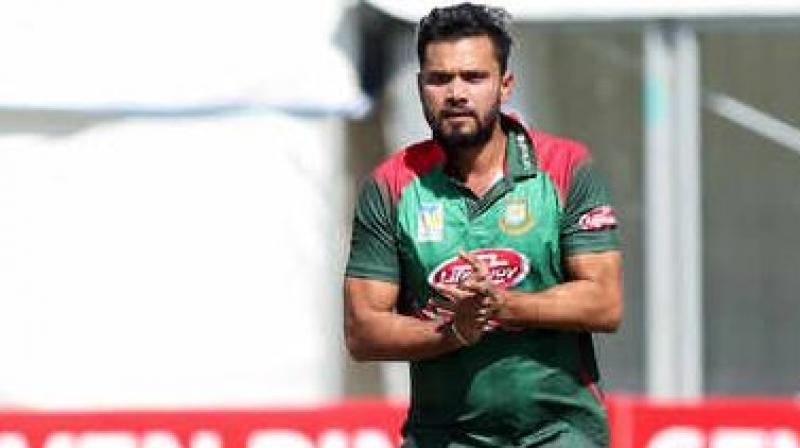 When asked about pressure that supporters create on players, Mortaza said it depends from player to player as to how they handle the pressure. (Photo: AFP)

Birmingham: Bangladesh skipper Mashrafe Mortaza on Monday said that his team will not follow England's approach, rather will play according to their own plan against India in the ICC Men's Cricket World Cup match on July 2 at Edgbaston.

"I think Indian spinners (Yuzvendra Chahal and Kuldeep Yadav) are doing a lot better. If you look at their stats, both are doing well. I can't say we will do the same that England did yesterday. I think we have to play according to our own plan," Mortaza said in a press conference.

Calling India a very strong side, the Bangladesh skipper said the match will not be easy but his side will play hard and give 100 percent on the field.

"Only two matches are left, we have to play our best. To be honest, India are a very strong side. It is not easy but we will play hard and give our 100 percent.

Every time we play, we want to be the best. We have to do our best as we are still in the tournament. We have to play a lot better than what we have played," he said.

When asked about pressure that supporters create on players, Mortaza said it depends from player to player as to how they handle the pressure. He, however, further added that there is no pressure from the crowd.

"(Cricket) is all about skills. We have to handle the pressure although it depends on man to man. It is good to see supporters but I don't think there is any pressure from the supporters. Indian fans are also doing the same thing," he said.

England and India played at the venue on Sunday. The hosts of the tournament opted to bat first and posted a mammoth total of 337. India struggled to chase down as they fell 31 runs short.

Reflecting on the pitch condition, Mortaza said, "I think it will be the same wicket. Both teams will get the same benefit here. Yes one side is small and batsmen will target but it is pretty normal. The team we will play against likes to chase. Though they couldn't chase yesterday still we are not taking them lightly."

Talking about all-rounder Shakib Al Hasan's performance, the Bangladesh skipper said Shakib has done everything that he could and will finish the World Cup on a good note.

"As far as (Bangladesh cricket) development is concerned, I think we are doing good. Shakib (Al Hasan) is doing what he can do. He has done everything that he could be it bat, bowl or field. I think he is our best performer in the World Cup and he will finish on a good note. If we manage to play well, it will be a big achievement," he said.