ICC CWC'19: 'It was close to a complete peformance': Jonny Bairstow

Bairstow was man of the match after scoring 111 in England’s 337, also fielding brilliantly as India managed 306-5 in reply. 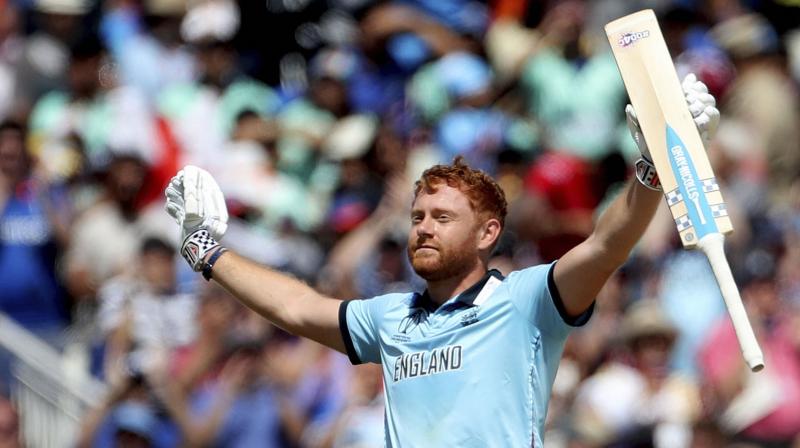 When Jonny Bairstow was a frustrated figure and claimed many people wanted to see England fail. (Photo: AP/PTI)

Birmingham: England opener Jonny Bairstow said Sunday’s 31-run victory over previously unbeaten India was the closest the hosts have come to a complete performance in the Cricket World Cup.

Bairstow was man of the match after scoring 111 in England’s 337, also fielding brilliantly as India managed 306-5 in reply.

“It came together today,” Bairstow said. “uni we have had. It was important to set the platform. We were reacting to each ball.

“Having been in the IPL it has helped me play spin and how to build an innings in all conditions. The ball did bits at first, I had some inside edges and you ride your luck when you can.”

England were boosted considerably by the return of Jason Roy, who hit an aggressive 66 in a superb 160-run opening stand.

“It was great to be back out there and putting together another big partnership,” said Roy, who missed the last three games with a hamstring injury.

“It was horrible to be out of the team but I needed to stay positive and I knew if I worked hard I would be back out on the pitch.

“I was raring to go at Lord’s but it was the smart decision not to let me play against Australia. It worked out for the best.”

England might still have to win their final group game against New Zealand to make the semi-finals, following defeats by Sri Lanka and Australia, when Bairstow was a frustrated figure and claimed many people wanted to see England fail.

The smile was back on Sunday, however, after the sort of performance that England had been routinely knocking out during the year coming into the tournament.

“It’s been frustrating for the guys, we know how well we can play and today we were pretty good with bat, ball and in the field,” said Bairstow.

“But there are things we can still improve on and we have three must-win games still to come. New Zealand have been terrific so far.”

Captain Eoin Morgan said the two openers had been “magnificent to watch. The continuation of partnerships throughout took us to a formidable total,” he said.

“From 10-20 overs we got 90-odd runs and that was the winning of the game. We took on the spinners and that’s the way we want to play our cricket. Hopefully this kick-starts it for us.

“It got more difficult to bat on throughout our innings so I wasn’t that worried when they were batting.”

Morgan, who failed with the bat again, caught hooking his ninth ball and out for one, said the victory went some way to restoring the team’s faith in their attacking approach.

“To play the way we did was very encouraging to us today,” he said. “The closer we can get to playing our A game, the more chances we can have to go all the way.

“The manner in which we played today, particularly with the bat, was outstanding. It certainty resonates with everybody in the changing room - it’s the way we wanted to play. It comes at a very good time and against an extremely strong team.”

England’s bowlers were also on form and Morgan had particular praise for Liam Plunkett, who took 3-55, including the prized scalp of Virat Kohli.

“He has been outstanding for us for four years, absolutely outstanding, particularly in that middle period of the innings,” said the England captain.

“He goes unnoticed a lot of the time but he is an extremely valuable player to us.”