ICC World Cup 2019: The Caribbeans cruise to a seven-wicket win over listless Pakistan

During his innings Gayle, who calls himself the “Universe Boss”, broke the record for the most sixes hit in World Cup history. 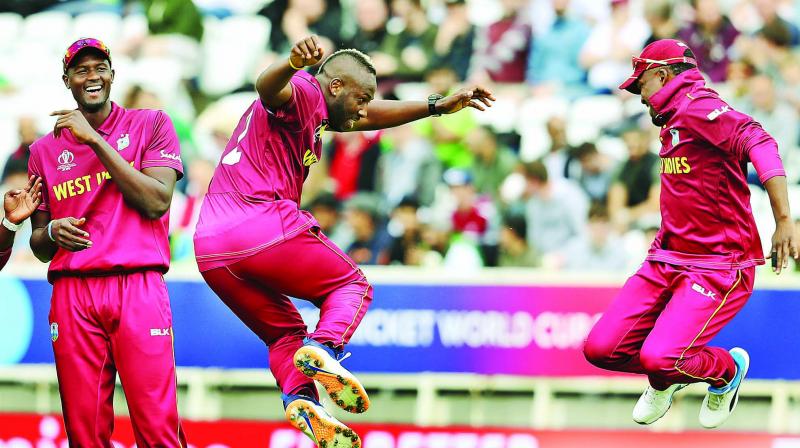 Andre Russell and Darren Bravo celebrate a Pakistan wicket as skipper Jason Holder looks on during their World Cup match at Nottingham on Friday. (Photo: AP)

Nottingham: West Indies crushed Pakistan by seven wickets in a one-sided World Cup match at Trent Bridge on Friday, with the two-time champions showing they are a resurgent force in the one-day game.

Pacer Oshane Thomas took four wickets as Pakistan were bundled out for their second-lowest World Cup total of 105 in just 21.4 overs on the second day of the competition in England and Wales. West Indies cruised to victory in just 13.4 overs, Chris Gayle top-scoring with 50. He reached his half-century off 33 balls with three sixes and six fours before he was dismissed off the next ball he faced.

During his innings Gayle, who calls himself the “Universe Boss”, broke the record for the most sixes hit in World Cup history. He now has 40 maximums, three more than retired South African batsman A B de Villiers.

Nicolas Pooran smashed paceman Wahab Riaz for a huge six over the square-leg boundary to give the 1975 and 1979 world champions an ideal start to their campaign.

“We kept our foot on the accelerator. We’ve eased off in the past but it was good to see the killer instinct today,” said Holder.

“We wanted to be aggressive. It's the nature of our cricket with bat, ball and in the field. We’ve definitely come to win this World Cup but I just want us to enjoy our cricket, play fearless cricket and make the fans back home proud.”

The only positive for Pakistan was three wickets for paceman Mohammad Amir on his World Cup debut after he missed the 2011 and 2015 tournaments due to a spot-fixing ban of 2010.

Amir had Shai Hope (11), Darren Bravo (0) and Gayle caught in an incisive six-over spell, but the batsmen had not put enough runs on the board to give the bowlers a chance. Pakistan's sloppy and vulnerable batting was cruelly exposed by some short-pitched bowling on a Trent Bridge pitch famous for big totals.