Delhi will be pinning their hopes on Dhawan for yet another electrifying start when they take on CSK in a clash of table-toppers here on Tuesday. 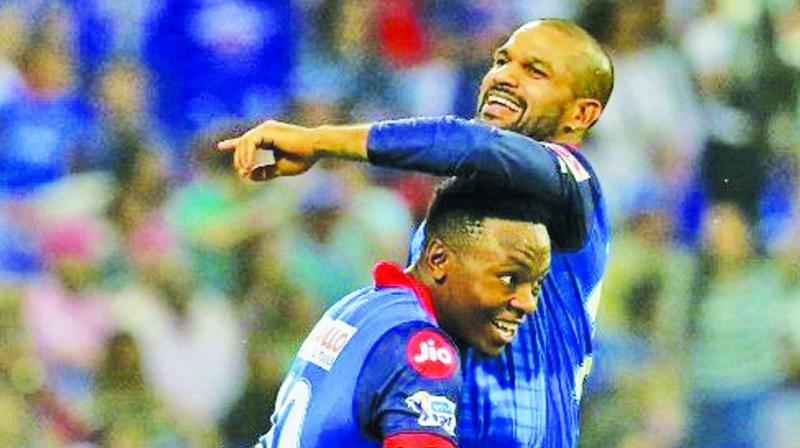 While Kagiso Rabada is the highest wicket-taker of the season, Shikhar Dhawan is the leading run scorer for Delhi.

Chennai: It’s a season of change for Delhi. Daredevils became Capitals, star-studded support staff — Sourav Ganguly and Ricky Ponting — made their way into the dugout and their jersey became a few shades lighter. But the biggest coup the new franchise owners pulled off was the pre-season trade that brought ‘local boy’ Shikhar Dhawan back to Delhi after a decade.

As Delhi stormed into the playoffs after beating Royal Challengers Bangalore last Sunday, it was Dhawan who shone the brightest. The left-handed opener has amassed 451 runs with an impressive average of 41. He has hit four half-centuries in last six matches including three in a row.

Delhi will be pinning their hopes on Dhawan for yet another electrifying start when they take on Chennai Super Kings in a clash of table-toppers here on Tuesday. A win against the defending champions would strengthen Delhi’s chances of finishing the league stage in top two as they already have a decent net run-rate.

Super Kings, on the other hand, would be eager to bounce back after a drubbing at the hands of Mumbai. In the absence of M.S. Dhoni, CSK looked listless and slumped to their only second home defeat since 2015. Dhoni who missed the match due to a bout of fever is still doubtful for Wednesday’s match.

While the experience of Dhawan amidst an array of youngsters is holding their batting department together, it’s South African pacer Kagiso Rabada who is spearheading the Delhi bowling unit.

Dhawan said Delhi are eager to continue their winning momentum. “I wasn’t in the side for about 10 years so I don’t know the processes they went through. But this year was a clean slate; from the name, the owner and everything. And of course, the boys are hungry and want to do well. Everything clicked at the right time and everyone chipped in. Any team that has a good set of Indian batsmen has an advantage,” he said.

Dhawan attributed a change in thought process for his swift turnaround after some initial hiccups with Delhi. “It is just in the mind. I knew I had to play faster. I knew what shots I have to bring in and what risks I have to take. We have got a very good support staff with Sourav and Ponting. They have been very positive,” he added.

The two teams have faced each other on 19 occasions with CSK emerging on top a whopping 13 times.