Playing game in the right spirit is priceless experience

The first was the running out of Rajasthan Royals mainstay Jos Buttler by Kings XI Punjab skipper Ravi Ashwin before he delivered the ball. 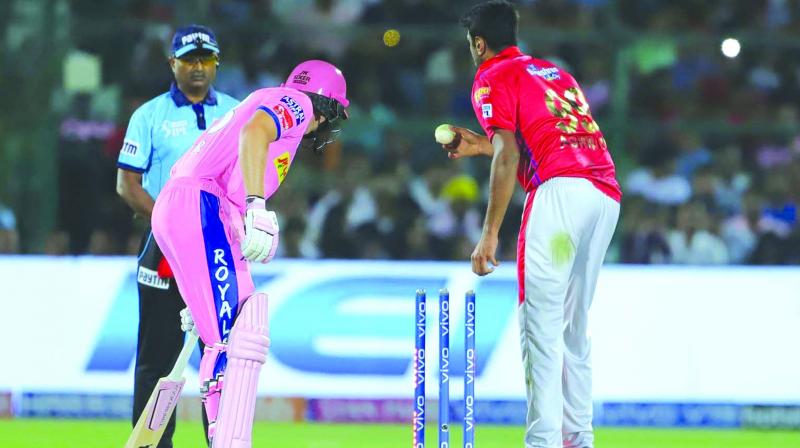 As a young cricketer, growing up in the dusty maidans of Mumbai (then Bombay), one was privy to stories that we heard from the greats of Bombay and Indian cricket. Stories of valour, grit and sportsmanship - important lessons handed down from generation to generation.

The story of  Col. C. K. Nayudu, the first Indian captain, spitting his teeth out after having been smashed on the mouth by a vicious bouncer from Dattu Phadkar and continuing batting. Or that of Dilip Sardesai locking up his skipper, Ajit Wadekar in a room, not allowing him to declare the Bombay innings all because he had been ‘run out’ by an over-enthusiastic Rajasthan bowler, before delivering the ball. The tale of the hapless Rajasthan fielders slogging on a hot day much after Bombay had taken the first innings lead in a dead Ranji Trophy game was hilarious.

The two incidents that happened over the past week in the ongoing 12th edition of the Indian Premier League (IPL), jogged one’s memory of similar incidents one had heard about. The first was the running out of Rajasthan Royals mainstay Jos Buttler by Kings XI Punjab (KXIP) skipper Ravi Ashwin before he delivered the ball. The much debated incident was immediately followed by another sorry case where Mumbai Indians (MI) won their fixture against Royal Challengers Bangalore (RCB) on the last ball bowled by Lasith Malinga, which turned out to be a no ball when the replays were shown.

Erstwhile coaches (from all over India) would have sneered at Ashwin’s act of not giving Buttler a warning before effecting the run out as that was the way cricket was played in the days of yore. They would also have rebuked RCB skipper Virat Kohli for berating the umpire in question and calling his call ‘ridiculous’ and emphasising that this was the IPL and not ‘club level cricket.’

In the past, coaches and senior cricketers across the country always stressed on a cricketer to play the game in the right (sporting) spirit and to respect the umpires no matter what they decided on. Former India opener, Madhav Apte often recounted a story how his coach, Madhav Mantri (erstwhile India wicket keeper batsman) derided him for tapping the pitch in an intercollegiate match after having got a terrible decision.

Apte, in his late 80s today and who continued to play senior level club cricket till his mid 60s, told us eager beavers that, “He had never forgotten that lesson all his life.” Apte was also coached by Vinoo Mankad, one of India’s greatest all-rounders and a coach who mentored many Indian test stars including Salim Durrani, Eknath Solkar, Sardesai, Dilip Doshi, son Ashok Mankad, Sudhir Naik, amongst others.

The recent run out effected by Ashwin is sadly named after this past master of Indian cricket who ran out Bill Brown of Australia in 1947 after having given him timely warnings. ‘Mankaded’ as that mode of dismissal is referred to is an abject insult to the great man who not only gave Indian cricket respectability but continued to give his time and share his expertise to groom the players of the future.

As someone who has had the benefit of his tutelage as a young pre-teen schoolboy, one recalls how important his grooming and tips were. Mankad not only coached young boys at Mumbai’s iconic Marine Drive but was also the first major guide for India’s future women cricketers, including Diana Eduljee, and many other members of the fair sex who went on to win laurels for India.

Vinoo bhai (as he was known) was India’s first cricket professional. The late Raj Singh Dungarpur, who played with him for Rajasthan in the Ranji Trophy, used to wax eloquent on his planning and they way he approached the game. While the world of cricket has gotten professional and the big bucks, that cricketers earn today, induce them break certain traditions (not rules, mind you), one can see parallels and differences between Mankad and the modern cricketer. While Mankad (and Kapil Dev, later) were as professional as the cricketers of the day, they did not forget the fact that they were playing a noble game of cricket, one played by Gentlemen.

Coming back to Kohli’s lofty statement that the IPL was ‘not club level cricket,’ the only reminder one can give the Indian captain is that the IPL is, in fact, a domestic tournament played by clubs. The only difference is that Mankad and others greats belonging to the generation before mine played all levels of cricket (including club cricket) with professionalism and pride. To them, the whole experience of playing the game in the right spirit was priceless, something that money can’t buy.