Sanju Samson missed a sharp chance at covers when Dhoni was on 28. 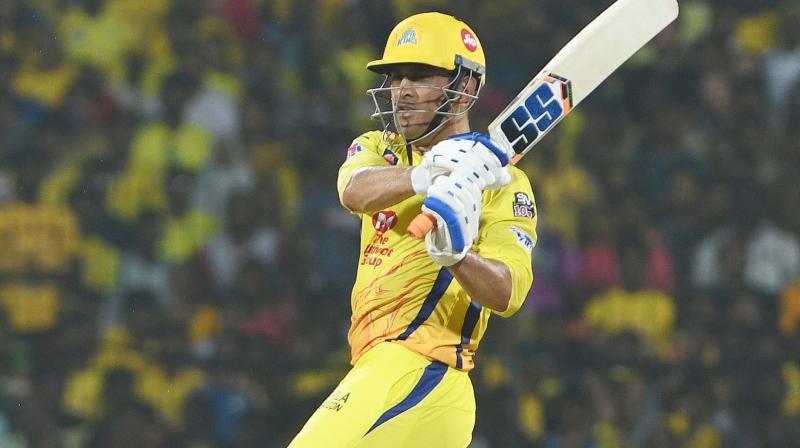 M. S. Dhoni plays a shot on way to his half century against Rajasthan Royals. (Photo: E. K. Sanjay)

CHENNAI: When Kedar Jadhav’s dismissal had left Chennai Super Kings reeling at 27 for three inside the powerplay, the home crowd was expected to fall silent. Instead, the yellow flag-waving supporters only grew boisterous at the sight of M.S. Dhoni swaggering in. After all, they all had come to watch their hero bat and the Sunday crowd got their money’s worth.

Dhoni’s unbeaten 75 off 46 balls was vintage stuff and it powered Chennai Super Kings to a thrilling eight-run win over Rajasthan Royals here at the M.A. Chidambaram Stadium. It was CSK’s third consecutive victory and it took them to top of the table.

The chase of 176 saw fortunes swinging like a pendulum as a late blitzkrieg from Ben Stokes (46 off 26 balls) reduced Royals’ equation from 56 off 24 balls to 12 off six balls. Dwayne Bravo, who had conceded 19 runs of his previous over, came back strongly to help CSK win.

Despite winning a crucial toss on a pitch where dew played a major role, Ajinkya Rahane’s Royals were guilty of letting Dhoni off the hook. Sanju Samson missed a sharp chance at covers when Dhoni was on 28.

Dhoni not only bailed Super Kings out of a precarious position, but also powered them a strong 175 for five. His 21st IPL half-century was a calculated assault. Like a predator, Dhoni cleverly picked his prey. It was Jaydev Unadkat who bore the brunt. The left-arm pacer, the costliest player of the last IPL auction, conceded 54 runs in his four overs with 24 of them coming in the final over of the innings.

Dhoni finished the innings in style by smashing Unadkat for three consecutive sixes. The bowlers found it difficult to grip the wet ball. The last 10 overs fetched 120 runs for CSK.