The bowlers provided it by firing for the first time on this tour, ripping through New Zealand’s top order 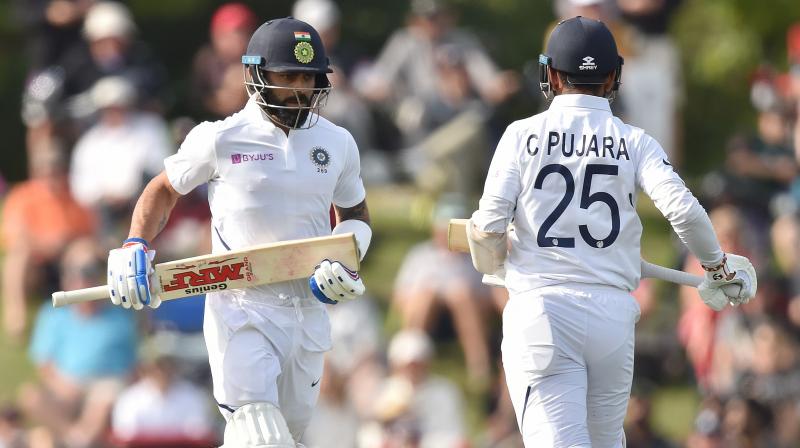 India's captain Virat Kohli and Cheteshwar Pujara run between the wickets on day two of the second Test cricket match between New Zealand and India at the Hagley Oval in Christchurch. AFP

Seamer Mohammed Shami took 4-81 and Ravindra Jadeja claimed an astonishing catch as India stormed back into the second and final test against New Zealand on Sunday by dismissing the hosts for 235 to bring up tea on the second day.

Kyle Jamieson provided some rearguard resistance with a gritty 49 and he was the last wicket to fall as the tourists took a slender first-innings lead of seven runs that looked highly unlikely when play started at Hagley Oval.

Already 1-0 down in the series after a thumping 10-wicket defeat in Wellington and under pressure after a final session batting collapse on day one, India needed something special to get back into the match.

Their bowlers provided it by firing for the first time on this tour, ripping through New Zealand’s top order in the first session and mopping up the tail in the second.

New Zealand had resumed on 63 without loss, looking to rack up a big lead over India’s first-innings 242 but lost all 10 wickets for the addition of just 172 runs.

Seamer Jasprit Bumrah took 3-62, spin-bowling all-rounder Jadeja pitched in with a couple of wickets, while Umesh Yadav got the show rolling with the wicket of Tom Blundell (30) in the first 20 minutes of play.