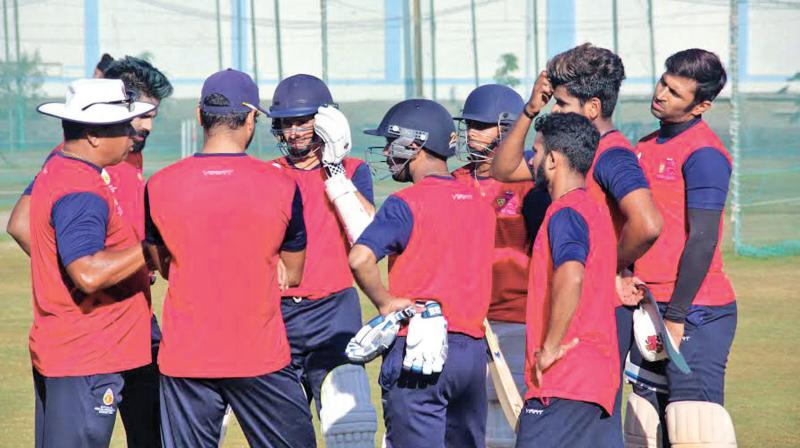 Mumbai coach Chandrakant Pandit (left) talks to his players ahead of their nets session on Saturday.

Rajkot: They call it ‘khadoos’, the attitude that has given Mumbai an unparalleled success story in the history of the Ranji Trophy. The never-say-die spirit, passed on to generations like legacy, saw the 41-time champions through many a crunch situation in the past and this season is no different for them.

Give them a slight opening, Mumbai will be all over the opponents. And no one has experienced Mumbai’s ability to ‘seize the moment’ more than Tamil Nadu, their opponents in the semifinal to be played here at the Saurashtra Cricket Association stadium from Sunday.

When the two teams squared up last time, in the season opener at Lahli, Mumbai pulled off a heist with ‘crisis man’ Abhishek Nayar scripting a two-wicket win on a green top. And a year before, Mumbai had done it by a wicket and that too after conceding the first innings lead.

TN have managed to beat Mumbai just thrice, all at home, in the history of the competition. When Mumbai were ruling the roost in the ’50s and ’60s, winning 15 titles in a row, Tamil Nadu could never even take a first innings lead. History might be favouring Mumbai in the semifinal, but Tamil Nadu are riding a crest of a wave after toppling a full-strength Karnataka in the quarter-final.

Despite missing two of their best batsmen, Ajinkya Rahane and Rohit Sharma, Mumbai claimed the title last year and now they are into the semi-final even though the team haven’t really found stability after losing out a few players to injuries.

Talented batsman Shreyas Iyer believes Mumbai’s attitude would be the clinching factor. “We have believed in ourselves irrespective of the conditions and opponents. Everything that matters is we want to win the game whatever the situation we are stuck in. I think it’s very clear in each and every player’s mind,” said Shreyas, the team’s highest scorer this season at 553.

Mumbai, in all probability, will hand over teen sensation Prithvi Shaw his maiden Ranji cap. The 17-year-old opener was called up in a bid to solve their opening woes. For TN, the only issue in their otherwise settled line-up is the opening partner for skipper Abhinav Mukund.

Coach Hrishikesh Kanitkar said they have been weighing different options, but are yet to arrive at one. The SCA stadium, with BCCI’s West Zone curator Dhiraj Parsana supervising the preparations, has rolled out a similar wicket to that of the recent India-England Test that ended in a draw. “Even though it has some grass cover, it looks quite a flat wicket,” TN captain Abhinav said. “I don’t think it will seam too much but I think it is a good wicket that will last five days,” he added.

Tamil Nadu pacers Aswin Crist (34 wickets), K. Vignesh (37) and T. Natarajan (23) have bowled their heart out this season and the trio once again hold the key in their bid to buck the trend and end Mumbai’s reign.