Australia double up on spin as Misbah ponders retirement

Shattered Pakistan could be forced to look for a new leader with 42-year-old Misbah admitting he was thinking about retirement. 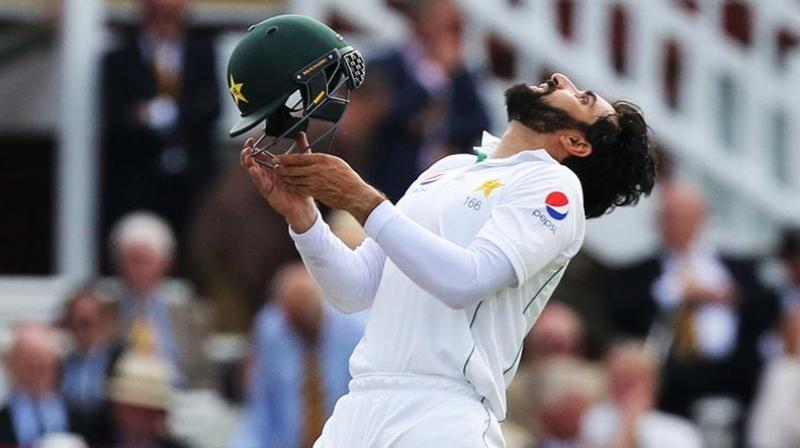 The end looms for Misbah-ul-Haq, the man who has guided his country to more victories than any other Pakistan captain – 24 in 52 Tests. (Photo: AFP)

Sydney: Australia have one eye on India and Pakistan could be contemplating life without their most successful captain Misbah-ul-Haq when the final 'dead' Test begins on Tuesday in Sydney.

Steve Smith's Australians wrapped up the three-match series with a Test to spare in a dramatic second innings demolition of Pakistan in two sessions in Melbourne on Friday to open up new selection possibilities for Sydney.

Shattered Pakistan could be forced to look for a new leader with 42-year-old Misbah admitting he was thinking about retirement, possibly even before the series concludes in Sydney.

"I always believed that if I couldn't contribute to the team then it's no point staying there. I haven't decided (about Sydney) but let's see," Misbah said after the tourists lost by an innings and 18 runs.

While the end looms for the man who has guided his country to more victories than any other Pakistan captain – 24 in 52 Tests – Australia have other considerations.

Spinners Steve O'Keefe and Ashton Agar have been included in a 13-man squad for a Sydney Cricket Ground wicket that is expected to turn.

Coach Darren Lehmann raised the prospect of playing two of his three spin options – the other is Australia's most-successful off-spinner Nathan Lyon – at the expense of paceman Jackson Bird with an all-rounder coming in.

Australia go to India for four Tests in February and March on likely turning pitches, putting the onus of O'Keefe and Agar to put in a good audition and stake a claim for a place on tour.

"It's more than likely that we're going to play two of those three spinners which means we'll also have to look to fit in an all-rounder," Lehmann said.

"It might end up that someone like Jackson Bird could be the unlucky one who misses out, but that will depend on the condition of the SCG pitch.

"If it looks like it's going to provide more assistance for the seamers, then we still have the option of playing all three specialist quicks and just the one spinner."

The all-rounder option could rest between Zimbabwe-born Hilton Cartwright or Agar, who Lehmann puts in the versatile category, saying "he's certainly got the talent to be a batting all-rounder or a spinning all-rounder".

Left-arm spinner Agar, 23, is on track to play for the first time since his only two Tests on the 2013 Ashes tour of England, where he scored 98 on debut at Trent Bridge batting at number 11.

Pakistan are facing their 12th straight defeat since their last Test win in Australia in Sydney 22 years ago.

Misbah was disconsolate following the Melbourne second-innings debacle on good batting surface that had seen the teams score a total of 1,067 first-innings runs.

"After scoring 443 you should not be in that position to lose a Test match on the last day," Misbah said.

"I think we should take the blame as a batting unit because the pitch was very good on the last day."