The potential drug is a short protein fragment, or peptide, that mimics a protein found on the surface of human cells, researchers said. 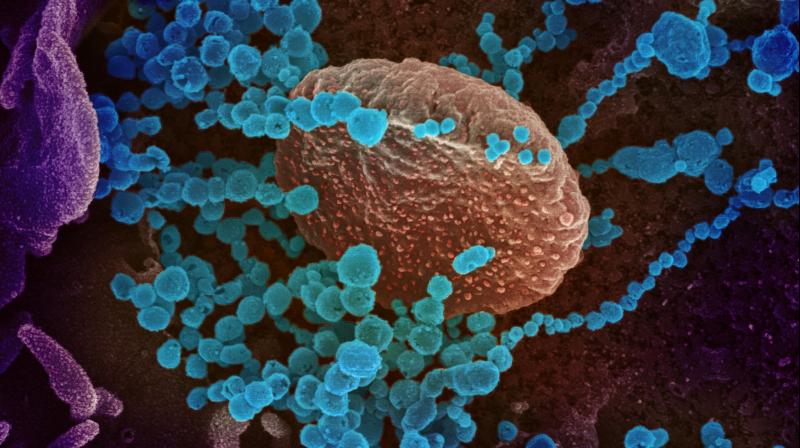 This scanning electron microscope image shows SARS-CoV-2 (round blue objects) emerging from the surface of cells cultured in the lab. SARS-CoV-2, also known as 2019-nCoV, is the virus that causes COVID-19. The virus shown was isolated from a patient in the U.S. (Image | NIAID-RML)

Boston: MIT scientists have designed a drug candidate that they say may block coronaviruses' ability to enter human cells, an advance that could help develop a possible treatment for COVID-19.

The potential drug is a short protein fragment, or peptide, that mimics a protein found on the surface of human cells, the researchers said.

They have shown that their new peptide can bind to the viral protein that coronaviruses use to enter human cells, potentially disarming it, according to the findings published on bioRxiv, an online preprint server.

The researchers have sent samples of the peptide to collaborators who plan to carry out tests in human cells.

The team began working on this project in early March, after the Cryo-EM structure of the coronavirus spike protein, along with the human cell receptor that it binds to, was published by a research group in China.

Coronaviruses, including SARS-CoV-2, which is causing the current COVID-19 outbreak, have many protein spikes protruding from their viral envelope.

Studies of SARS-CoV-2 have also shown that a specific region of the spike protein, known as the receptor binding domain, binds to a receptor called angiotensin-converting enzyme 2 (ACE2).

This receptor is found on the surface of many human cells, including those in the lungs.

The ACE2 receptor is also the entry point used by the coronavirus that caused the 2002-03 SARS outbreak.

In hopes of developing drugs that could block viral entry, Genwei Zhang, a postdoctoral scholar at MIT, performed computational simulations of the interactions between the ACE2 receptor and the receptor binding domain of the coronavirus spike protein.

These simulations revealed the location where the receptor binding domain attaches to the ACE2 receptor -- a stretch of the ACE2 protein that forms a structure called an alpha helix.

The team then used peptide synthesis technology that their lab had previously developed, to rapidly generate a 23-amino acid peptide with the same sequence as the alpha helix of the ACE2 receptor.