There's a "super blue blood Moon' on the rise

The blood red colour happens when the Earth enters between the Moon and the Sun, cutting off light rays that brighten the lunar surface. 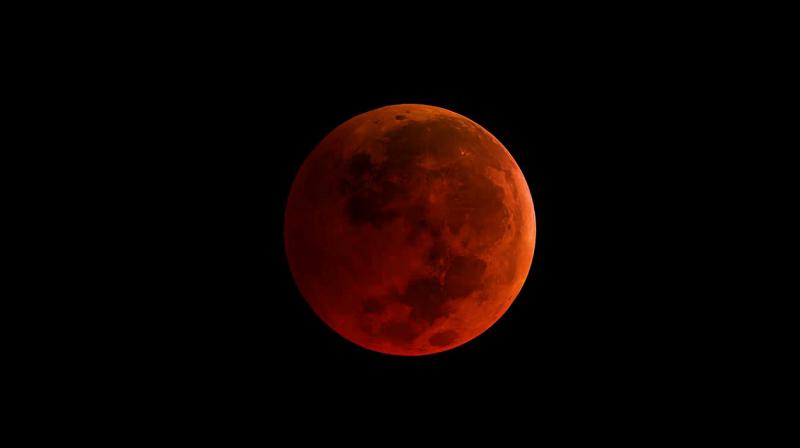 If you miss this one, the next blue Moon total lunar eclipse will happen on December 31, 2028.

Stargazers in North America, Hawaii, the Middle East, Russia, India, and Australia had the chance to witness a rare "super blue blood Moon" Wednesday, when Earth's shadow bathes our satellite in a coppery hue.

The celestial show is the result of the Sun, Earth, and Moon lining up perfectly for a lunar eclipse just as the Moon is near its closest orbit point to Earth, making it appear "super" large. It is the second full Moon within the same month, a phenomenon called a "blue" Moon which has nothing to due with its colour. The "blood" in the name comes from the reddish brown colour the Moon takes on when Earth enters between it and the Sun, cutting off the light rays that usually brighten the lunar surface.

Depending on cloud cover, the spectacle will first be visible in the pre-dawn skies of the western United States, when the setting Moon enters the path of eclipse, astronomers say. "Weather permitting, the (American) West Coast, Alaska and Hawaii will have a spectacular view of totality from start to finish," said NASA Moon expert Gordon Johnston, advising amateur astronomers to "set your alarm early and go out and take a look."

Totality is when the Moon is completely shadow-covered.

The extreme east of Africa, the Middle East and Asia, Russia, Australia and New Zealand can enjoy the spectacle on Wednesday night, as the Moon rises there. People in Hawaii, Australia and eastern Asia should be able to follow the full eclipse from beginning to end, said NASA. But most of South America, Africa and Europe, where the alignment occurs in the middle of the day, will miss out on the show.

The last "super blue blood Moon" occurred on December 30, 1982, when it was seen in Europe, Africa and western Asia. For North America, the last time was in 1866. This time around, viewing will be a challenge for those on the US East Coast. The eclipse begins just as the Moon is setting in the west and the Sun is rising in the east. Moon-watching parties for the one-hour-16-minute eclipse were advertised up and down the US West Coast. But people outside the path of totality, or whose view is obstructed by cloudy weather, may follow the event live via NASA’s website.

If you miss this one, the next blue Moon total lunar eclipse will happen on December 31, 2028, though it won't be quite as large since it will not be as close to Earth. Another will occur on January 31, 2037. "The red colour during a lunar eclipse is very distinctive and it's a rare treat to be able to see a blood red Moon," said Brian Rachford, associate professor of physics at the Embry-Riddle Aeronautical University. "One of the great things about a lunar eclipse is you also don't need any special equipment to see it. Anyone can go outside and look at the Moon."