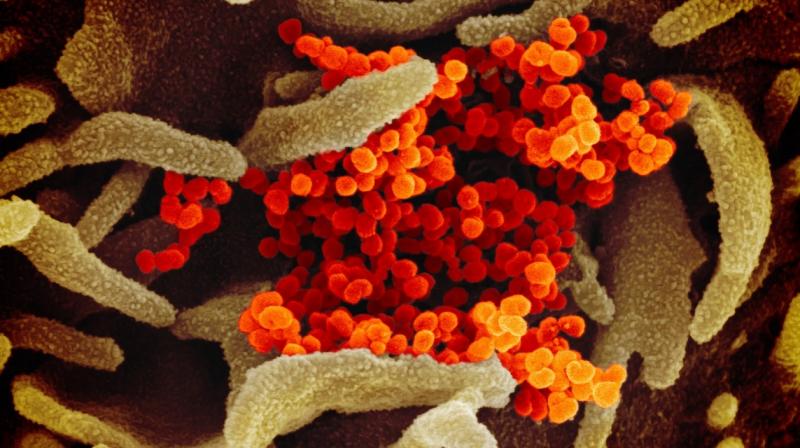 The SARS-CoV-2 virus has RNA as its genetic material. (Photo: Representational/PTI)

New Delhi: Scientists in Taiwan have developed a new DNA-based COVID-19 vaccine that successfully induced long-lasting antibodies against the novel coronavirus in mice and hamsters.

Some currently available COVID-19 vaccines rely on messenger RNA or mRNA strands to teach the human immune system to recognise the SARS-CoV-2 virus, which causes the disease.

Most viruses have either RNA or DNA as their genetic material. The nucleic acid may be single- or double-stranded.

The SARS-CoV-2 virus has RNA as its genetic material.

The new study, published in the journal PLOS Neglected Tropical Diseases, demonstrates the successful development of a vaccine that instead uses DNA encoding the virus' spike protein, which allows it to enter and infect the human cells.

Both DNA and mRNA vaccines use genetic material encoding part of a virus to elicit an immune response.

However, DNA vaccines can often be produced more quickly and at lower cost, and transported without the requirement of cold temperatures, the researchers said.

Recent clinical trials have indicated that DNA vaccines are safe and effective in treating infections including HIV-1, Zika virus, Ebola virus and influenza viruses, they said.

In the latest study, researchers from the National Health Research Institutes, Taiwan, developed a vaccine that uses DNA encoding the SARS-CoV-2 spike protein.

To overcome the poor delivery of DNA into cells often seen with DNA vaccines, the team coupled electroporation with the delivery of the DNA vaccination.

Electroporation is a technique in which an electrical field is applied to cells in order to increase the permeability of the cell membrane, allowing chemicals, drugs, or DNA to be introduced into the cell.

The researchers showed that mice and hamsters immunised with the new DNA vaccine developed long-lasting antibodies against the SARS-CoV-2 spike protein.

Those antibodies peaked at eight weeks post-immunisation but levels remained relatively high at week 20, they said.

Hamsters that received two doses of the vaccine at a three-week interval and were exposed to COVID-19 after seven weeks were protected from the virus, according to the researchers.

This shows no loss of body weight and less viral RNA in their lungs compared to animals that were not immunised, they noted.

"The DNA vaccine is thermally stable, which means no cold chain is needed, and can induce high level of long-lasting neutralising antibody titers against SARS-CoV-2," the authors of the study said.

"The DNA vaccine confers protective efficacy against SARS-CoV-2 infection in Syrian hamsters which is a severe COVID-19 disease animal model," they added.

Viral titre refers to the concentraion of infectious viral particle which is different from the total virus.