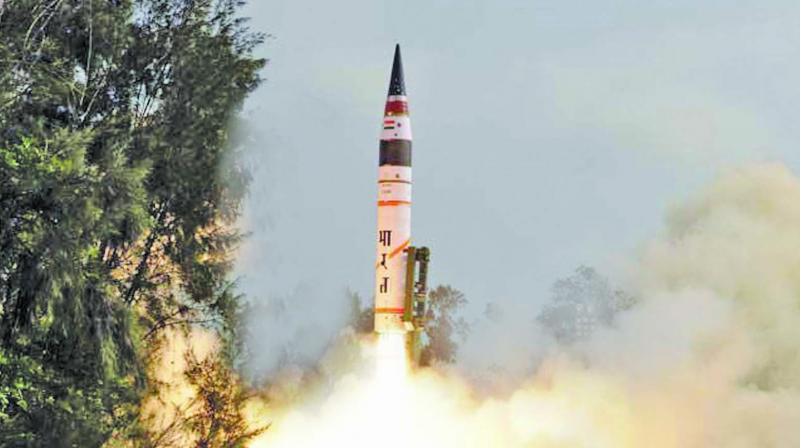 With this, the Agni-V is almost ready for induction into the Strategic Forces Command.

New Delhi/Balasore (Odisha): It was a day of redemption for India and the much-faulted state-owned Defence and Research Development Organis-ation (DRDO) on Monday when one of the country’s deadliest missiles capable of traversing the longest distance, Agni V, completed a successful full-range test from the Abdul Kalam island off the Odisha coast.

The mission objectives were successfully met as radars, ships, the target point and other electro-optical systems tracked the 17-metre projectile along its entire path even as the parameters were on real-time display. The development came six days after the abject failure of the Nirbhay missile test, which some reports say is as good as dumped now.

A defence official said almost entire Asia, including Pak and China, will be in the Agni V’s strike range as will be some parts of Europe. Besides being integrated with cutting-edge technology in terms of navigation and guidance, warhead and engine, Agni V is “integrated with a sophisticated mobile launcher in its deliverable configuration that enables launch of the missile with a very short preparation time as compared to an open launch” and also possessing advantages of higher reliability, longer shelf life, less maintenance and enhanced mobility.

The missile was tested by a completely new group of scientists led by V. Sateesh Reddy, programme director, Agni V.

The question, however, remained as to whether the DRDO had tested the country’s first Inter Continental Ballistic Missile (ICBM), which has to have a minimum range of 5,500km with the defence ministry terming it as a ‘Long Range Surface-to-Surface Ballistic Missile’. But the MoD’s cryptic message was that the missile had been tested to its ‘full-range’. “This was the fourth test of Agni-V missile and the second one from a canister on a road mobile launcher. All four missions have been successful,” the ministry said.

While a government source familiar with the test details said that the Agni V is an ICBM with its range up to 7,000km, former DRDO director central V.K. Saraswat, a leading scientist closely associated with the project until a few years back, told this newspaper: “The exact range is not for public consumption but be rest assured that the country’s strategic requirements have been flawlessly met.”

With this, the Agni V is almost ready for induction into the Strategic Forces Command.

“What the successful test means is that the missile’s induction is almost final now. Its technology has matured after four successful tests. It is proved repeatability and therefore ready to move into production mode,” Dr Saraswat added.

What is of key significance here is that except for the electronic components which makes for about 7-10% of its composition, the rest of about 90% of Agni V is indigenous.

The ICBMs are ballistic missiles capable of carrying nuclear and other warheads for upwards of 5,500km. Presently, the US, Russia, and China possess ICBMs in their arsenal while quite a few other countries like Israel, France, South Africa, and North Korea claim to possess the capability to build ICBMs. India has joined this select club.

This was the first flight-test of the Agni-5 missile after India became a member of the Missile Technology Control Regime (MTCR), a 35-nation group that keeps check on the spread of unmanned delivery systems for nuclear weapons.

ICBMs are strategic weapons in the sense that they enable a country to move out of the regional context because of their long range which has a bearing on global dynamics.