The 100kg spacecraft has been deployed from ISS to conduct several experiments regarding space junk cleanup. 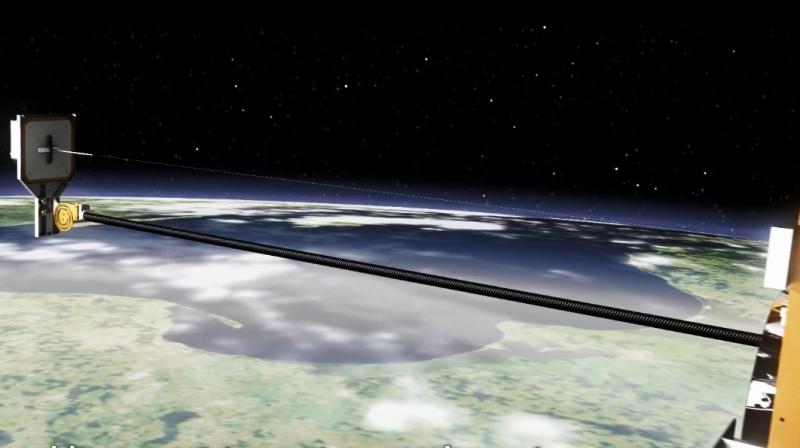 Once the spacecraft collects the intended amount of space junk, it will unfurl its sails and drag itself down towards Earth. (Photo: Surrey Space Centre)

Earlier in the year, scientists from Europe announced a space project aimed to clear out junk orbiting the Earth with a simple cost-effective mission. The idea was to use a spacecraft to clear the junk in order to protect other valuable space missions from getting damaged. The project was docked at the International Space Station until now and has been released into space for conducting certain experiments.

The British-built satellite, which goes by the name of RemoveDEBRIS, is one of the first attempts to tackle the dangerous space debris orbiting the Earth, the British space agency said in a statement. The spacecraft will be equipped with a harpoon and net system, along with several other onboard scientific equipment to conduct experiments related to its mission of cleaning up the orbits.

Once the spacecraft collects the intended amount of space junk, it will unfurl its sails and drag itself down towards Earth. The spacecraft will be left to burn up during the re-entry process, along with all the debris it will be carrying.

The spacecraft features a 30cm (one foot) long harpoon for getting hold of the target on an arm around 20 metres (65ft) away, before reeling it back in on a rope. Another larger harpoon, around 1.5 metres-long and weighing 2.2kg (5lb) is also being designed in the lab, as part of the European Space Agency’s Clean Space programme. It aims to capture space junk targets weighing up to eight tonnes (17,000lb).

The project will be instrumental in cleaning up the Earth orbits as scientists have estimated approximately 7,000 tonnes of junk orbiting our planet at speeds of 27,000km/h.