The collision detected a pile-up of 14 galaxies, which are 90 per cent away across the observable universe. 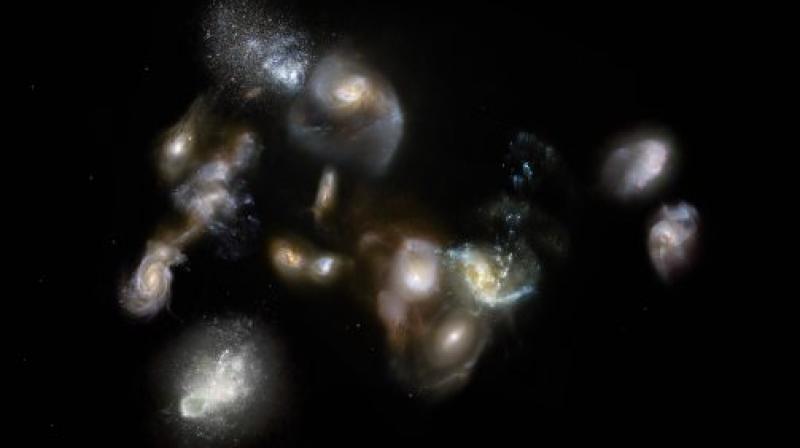 Astronomers have detected the early stages of a colossal cosmic collision, observing a pile-up of 14 galaxies 90 per cent of the way across the observable universe in a discovery that upends assumptions about the early history of the cosmos.

Researchers said that the galactic mega-merger observed 12.4 billion light-years away from Earth occurred 1.4 billion years after the Big Bang that gave rise to the universe. Astronomers call the object a galactic protocluster, a precursor to the type of enormous galaxy clusters that are the largest-known objects in today’s universe.

It marked the first time scientists observed the birth of a galaxy cluster, with at least 14 galaxies crammed into an area only about four times the size of our average-sized Milky Way galaxy.

A protocluster as massive as the one observed here, designated as SPT2349-56, should not have existed at that time, according to current notions of the early universe. Scientists had figured this could not happen until several billion of years later.

“We were staggered by the implications,” said astrophysicist Scott Chapman of Dalhousie University in Canada. “Yes, conventional wisdom was that clusters take a lot longer to build up and assemble. SPT2349 shows us it happened much more rapidly and explosively than simulations or theory suggested.”

Galaxy clusters can have thousands of galaxies bound together by gravity that can boast total masses a quadrillion larger than our sun, with immense amounts of the enigmatic material called dark matter, gigantic black holes and super-heated gas.

SPT2349’s mass is about 10 trillion times larger than our sun.

The galaxies within SPT2349 were producing stars at a remarkable clip, up to a thousand times the Milky Way’s star-formation rate.

In observing objects so distant, astronomers are peering back in history because of the length of time light takes to travel. SPT2349-56 appeared when the universe was about a tenth its current age.

“This result is exciting as it allows us to directly study the formation of a massive galaxy cluster in the early universe,” Yale University astronomer Tim Miller added.

The researchers, who studied SPT2349 using land-based telescopes in Chile, said it most likely has snowballed in size since 12.4 billion years ago and could be among the largest structures in the cosmos today.

The research was published in the journal Nature.