Know more: An ark in ice

Tucked away within the biting cold of far-flung Norway is a vault that can save humanity from hunger. 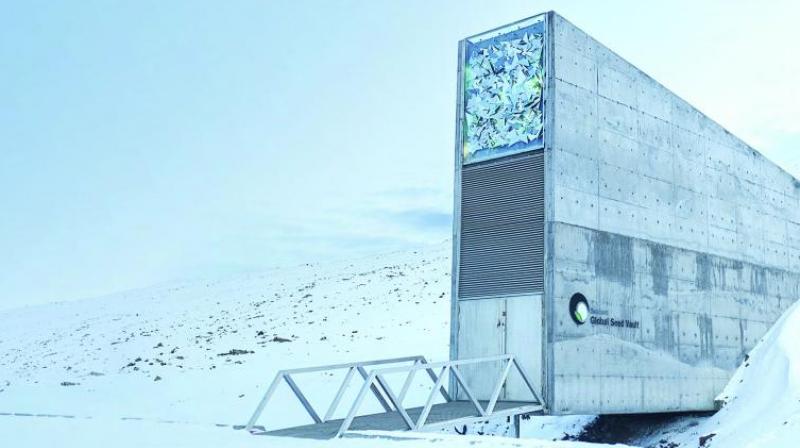 The Seed Vault can store 4.5 million varieties of crops.

The Crop Trust is an international organisation working to conserve crop diversity worldwide, forever. Worldwide, more than 1,700 genebanks hold collections of food crops for safekeeping, yet many of these are vulnerable, exposed not only to natural catastrophes and war, but also to avoidable disasters, such as lack of funding or poor management. Our job is to create, fund and manage a global system for the conservation of crop diversity.

One of our most visible projects in developing this global system lies deep inside a mountain on a remote island in the Svalbard archipelago, halfway between mainland Norway and the North Pole. It is the Global Seed Vault, a fail-safe seed storage facility, built to stand the test of time — and the challenge of natural or man-made disasters. The Seed Vault represents the world’s largest collection of crop diversity.

The recognition of the vulnerability of the world’s genebanks sparked the idea of establishing a global seed vault to serve as a backup storage facility. The purpose of the Vault is to store duplicates (backups) of seed samples from the world’s crop collections. The majority of the time, the Seed Vault has no working staff, but is monitored off site by Norwegian firm, Statsbygg. The Seed Vault is run in a partnership by the Norwegian government, the Crop Trust and NordGen.

The Seed Vault has the capacity to store 4.5 million varieties of crops. Each variety will contain on an average 500 seeds, so a maximum of 2.5 billion seeds may be stored in the Vault.

Currently, the Vault holds more than 8,80,000 samples, originating from almost every country in the world. Ranging from unique varieties of major African and Asian food staples such as maize, rice, wheat, cowpea, and sorghum to European and South American varieties of eggplant, lettuce, barley, and potato. In fact, the Vault already holds the most diverse collection of food crop seeds in the world.

The depositors who will deposit material will do so consistently with relevant national and international law. The Seed Vault will only agree to receive seeds that are shared under the Multilateral System or under Article 15 of the International Treaty or seeds that have originated in the country of the depositor. Each country or institution still owns the seeds they have deposited. This system entails that the depositor is the only one that can withdraw the seeds and open the boxes. However, if you are really interested in getting access to the diversity, one only has to ask the depositing institution as they have their own ‘working’ collection.

Only once in the seed vault’s nine-year history has a depositing institution asked for their seeds be returned. This happened in 2015 when the International Center for Agricultural Research in the Dry Areas (ICARDA) asked for a portion of their deposit to be sent to their facilities in Morocco and Lebanon. The seeds were originally stored at the ICARDA’s genebank in Aleppo, Syria. The civil war in Syria had made it increasingly difficult for ICARDA’s staff to ensure that material can be regenerated and distributed to users around the world.  Whilst the seed cold store is still operational, ICARDA staff are not able to use the surrounding land to replenish seed stocks, a vitally important aspect of its work for an organisation that normally distributes around 25,000 samples every year to partners.

Next year, in February, there will be a major deposit to the Svalbard Global Seed Vault and we hope that India’s National Bureau of Plant Genetic Resources will make a second deposit to the Vault. The year 2018 will mark the 10th anniversary of the Seed Vault and the Crop Trust is encouraging all institutes to make a deposit to celebrate the world coming together to protect crop diversity. The work to ensure the conservation of crop diversity doesn’t end with the Svalbard Global Seed Vault. For the Crop Trust, it is really just the beginning.

— The author is the lead partnerships coordinator with the Global Crop Diversity Trust.