The spacecraft, OSIRIS-REx, has even snapped its first, blurry pic of the cosmic body. 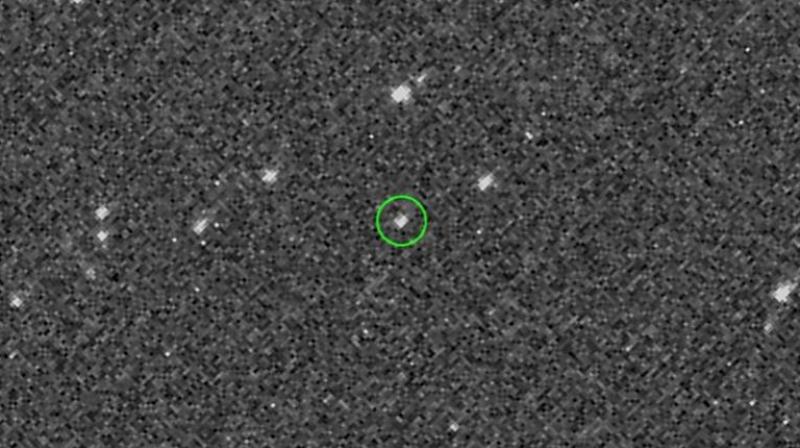 On Aug. 17, the OSIRIS-REx spacecraft obtained the first images of its target asteroid Bennu from a distance of 1.4 million miles (2.2 million km), or almost six times the distance between the Earth and Moon. This cropped set of five images was obtained by the PolyCam camera over the course of an hour for calibration purposes and in order to assist the mission’s navigation team with optical navigation efforts. Bennu is visible as a moving object against the stars in the constellation Serpens. Credits: NASA/Goddard/University of Arizona

Two years after launching from Florida, a NASA spacecraft is closing in on an ancient asteroid, Bennu, for a sample of space dust that could reveal clues to the start of life in the solar system. The spacecraft, OSIRIS-REx, has even snapped its first, blurry pic of the cosmic body, which is about the size of a small mountain, about 500 yards (meters) in diameter.

The spacecraft is designed to circle Bennu, and reach out with a robotic arm to "high-five" its surface, then return the sample it collects to Earth in 2023. The first images of Bennu were taken on August 17 at a distance of 1.4 million miles (2.3 million kilometers) from the $800 million spacecraft.

"This is the closest we have even been to Bennu," said Dante Lauretta, OSIRIS-REx principal investigator at the University of Arizona, Tucson. "This is significant in that we are now in the vicinity of the asteroid, closer than we have ever been even during the close approaches of the asteroid to the Earth."

Bennu was chosen from the some 500,000 asteroids in the solar system because it orbits close to Earth's path around the sun, it is the right size for scientific study, and is one of the oldest asteroids known to NASA. Astronomers say it poses a slight risk -- a one in 2,700 chance -- of colliding with Earth in 2135.

It is also a carbon-rich asteroid, the kind of cosmic body that may have delivered life-giving materials to Earth billions of years ago. The OSIRIS-REx mission is not the first to ever visit an asteroid and attempt a sample return -- Japan has done it before and Europe has managed to land on a comet.

But it is the first asteroid-sample-return mission for NASA, and it aims to bring back the biggest sample ever, on the order of 2.1 ounces (60 grams). The US men who walked on the Moon during the Apollo era of the 1960s and 1970s collected and carried back to Earth 842 pounds (382 kilograms) of moon rocks.

In December, the spacecraft will begin a detailed survey of asteroid's surface, which NASA has defined as "arrival" at the asteroid. Orbital insertion is expected on December 31.

The sample, however, will not be taken until July 2020. OSIRIS-REx stands for Origins, Spectral Interpretation, Resource Identification, Security-Regolith Explorer.