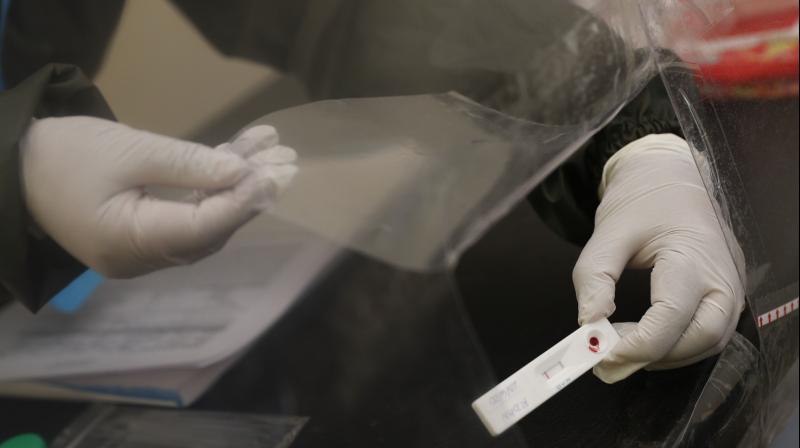 A doctor checks a blood sample taken from a suspected covid patient to test for the new coronavirus. AP photo

Hyderabad: Public participation is very important to control Sars-Cov2 virus according to a study of 100 days of Covid-19 in India. The study shows that breach of the lockdown led to a spurt of cases in India.

In the initial days of the lockdown of 21 days, there was a visible impact and the virus could be contained, the study says. Before the lockdown, the doubling time was 3.4 and it improved to 7.5 by April 19. It further improved to 12.9 by May 13. Despite these efforts and the extended lockdown, the number of cases has risen in India, as the last 10 days of the 100-day period shows a major breach with heavy movement of people from one part of the country to another.

This large scale human movement allowed for proliferation of the virus. Scientists in their evaluation term SARS Cov 2 as a ‘rudimentary virus whose genetic structure is proving to be more experienced and intelligent than entire humanity. Its ability to strike humans in unknown ways has made it a potential virus with an ability to cause greater disruption and destruction.’

This observation is because the virus has acted differently in different locations in the world and also in India. The effect of the pandemic has not been uniform in India because testing, which is a main way of identifying the virus, is poor due to lack of kits and laboratories. For this reason, too, reports from rural areas are very limited and exact number of cases is not clear.

According to data of the ministry of health and family welfare, the mortality rate in those with heart ailments is 10 per cent and in those with diabetes, seven per cent. Public participation in understanding an infectious disease is very important to contain it. Dr Kiran Madhala, a senior doctor explained, “Public participation is most important in controlling a pandemic. There is a need for non-pharmaceutical interventions such as educating people about prevention and protection. Hand and respiratory hygiene and social distancing must be practised for the next few months. This is the only way forward and that has to be told to people repeatedly to protect them from the virus.”

With cases rising, compliance of people is vital to contain the virus and the rules must be followed strictly if the spread is to be controlled, stated experts.