Large amounts of the solidified lumps and deposit were spotted for the first time by the robot. 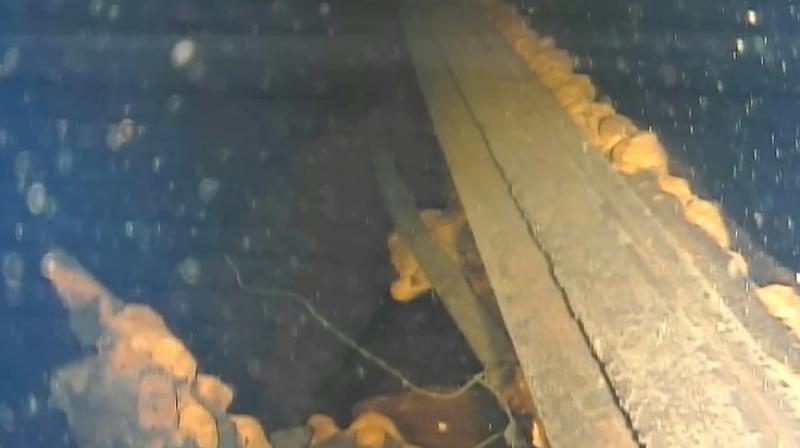 This handout video grab taken with an underwater robot and provided by Japan's International Research Institute for Nuclear Decommissioning on July 21 shows a part of the pedestal wall inside reactor No. 3 at Fukushima nuclear power plant. (Photo: AFP)

Lava-like rocks believed to be melted nuclear fuel have been spotted inside Japan's stricken Fukushima reactor by an underwater robot, the plant's operator said at the end of a three-day inspection.

Large amounts of the solidified lumps and deposit were spotted for the first time by the robot on the floor of the primary containment vessel underneath the core of Fukushima's No. 3 reactor, the Tokyo Electric Power Co (TEPCO) said.

"There is a high possibility that the solidified objects are mixtures of melted metal and fuel that fell from the vessel," a TEPCO spokesman said, adding that the company was planning further analysis of the images.

The three-day investigation using the small, remote controlled underwater robot, which is about the size of a loaf of bread, ended Saturday, the spokesman said.

TEPCO said the images were the first "highly likely" sighting of melted fuel since the 2011 disaster, when a massive undersea earthquake sent a huge wave barrelling into Japan's northeast coast, killing more than 18,500 people, and sending three reactors into meltdown at the plant in the worst such accident since Chernobyl in 1986.

Locating the fuel debris is a key part of the decommissioning process for the plant, which is expected to take decades.

In February, TEPCO sent another robot into one of three damaged reactors where radiation levels have hit record highs.

But the mission at the No. 2 reactor was aborted as the robot had difficulty moving and could not reach its target destination beneath the pressure vessel, through which nuclear fuel is believed to have melted.

The Japanese government said in December that it expects total costs including compensation, decommissioning and decontamination to reach 21.5 trillion yen ($192.5 billion) in a process likely to take at least four decades as high radiation levels slow operations.