Science   24 Apr 2017  Elixir of life: Scientists claim to have found a way to desalinate seawater
Science

Elixir of life: Scientists claim to have found a way to desalinate seawater

University of Manchester researchers have invented a ‘graphene oxide membrane’ that sieves salt from seawater. 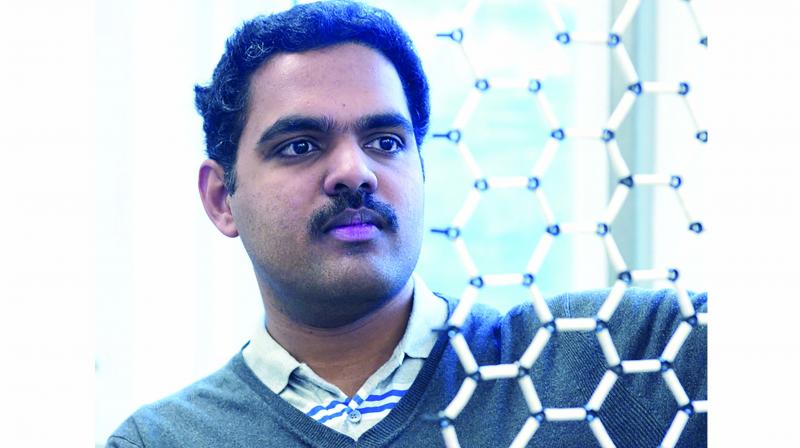 If this new technology clicks, mankind will have an abundant supply of water for all its needs, especially drinking. Can seawater solve all our drinking water problems? A team of researchers from the University of Manchester in the UK seems to think it can. They have invented a ‘graphene oxide membrane’ that sieves salt from seawater. The invention could mark a turning point in the quest for efficient desalination, as about 96 per cent of the water on our planet is saline. If the method proves successful, it would mean better and cost-effective water facilities.

The team of researchers behind the breakthrough comprised PhD student Jijo Abraham and research assistant Vasu Siddeswara Kalangi and was led by Professor Rahul R. Nair.

Throwing light on the significance of his work, Mr Nair said, “We have known about graphene oxide membranes for a long time now. However, previous research in our lab showed that the membrane becomes slightly swollen when immersed in water, allowing all the smaller ions to seep through along with the water. But the larger molecules and ions are blocked. In order to remove the common salts like sodium and potassium from salty water to make it potable, we need to tailor the capillary width inside the membrane below 1 nanometre. This makes the water pass through while trapping all the salts, thereby making saline water drinkable.”

He added, “Here, a team of researchers has found an excellent strategy to minimise the swelling of the capillaries by building walls of epoxy resin on either side of the graphene oxide membrane, thus stopping it from expanding in water. The selective separation of water molecules from ions by physically confining the GO layers along with the tunable ion sieving will be a great breakthrough in the desalination and water filtration applications.”

According to the professor, the efficiency of desalination technology always relies not only on how high the water permeation rate is, but also on its capability in trapping all the other salts and molecules. “In this direction, our results are promising where we have observed a significant reduction in the permeation of ions without much sacrifice in the water permeation rate,” said Mr Nair. Several major desalination plants around the world use polymer-based membranes to filter out salt, but the process is still largely inefficient and expensive, therefore researchers are tasked with the enormous challenge of finding a way to make it quicker, cheaper, and easier. “We are planning to do more laboratory-scale research to compare our membrane performance at different conditions so that we can evaluate the performance of these new membranes and compare it with existing membranes,” said Mr Nair.

Graphene oxide is very cheap and has already shown potential for industrial-scale production.

Speaking on the road ahead for the invention, Mr Nair said, “The methodology explained in the report, of the incorporation of graphene flakes into the graphene oxide membranes and physically restricting the swelling by epoxy restriction has proved to be efficient in the laboratory experimentation. Now, more study is needed to be carried out to make it commercially viable. We are now looking for potential industrial partners to work with us to scale up this technology and make it available for people around the world.”