Images from nearby asteroid probe gives clues on planet formation

The study also helps prepare for protection against asteroid headed to Earth. 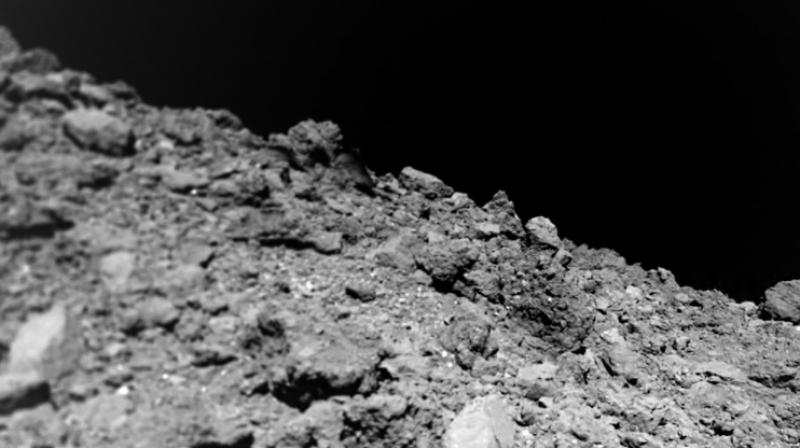 While the planet hasrough and smooth big rocks, it has a suspicious lack of space dust (Photo: MASCOT/AFP)

Photographs snapped by a shoebox-sized probe that explored the near-Earth asteroid Ryugu offer new clues about its composition, insights that are expected to help scientists understand the formation of our solar system.

The German-French Mobile Asteroid Surface Scout (MASCOT) was dropped off by Japan's Hayabusa2 spacecraft on October 3, 2018, free-falling from a height of 41 meters (135 feet) for six minutes before it hit the surface.

It then bounced a couple of times - reaching a height of 17 meters on the first bounce -- before coming to rest.

Ryugu is just 900 meters wide and so its gravity is 66,500 times weaker than Earth's. Had MASCOT been equipped with wheels, its forward motion would have launched it back into space.

Instead, it hopped around the surface using the tiny amount of momentum generated by a metal swing arm attached to its boxy body, which weighed 10 kilograms (22 pounds).

In addition to taking temperature readings and other measurements, MASCOT sent back a series of pictures showing the asteroid is covered with two types of rocks and boulders: dark and rough ones with crumbly surfaces resembling cauliflowers, and bright and smooth ones.

"The interesting thing there is, it really shows that Ryugu is the product of some kind of violent process," Ralf Jaumann of the German Aerospace Center told AFP. He is the lead author of a paper describing the findings, published Thursday in the journal Science.

Ryugu may be the "child" of two parent bodies that collided, broke up and were then pulled back together by gravity, the researchers say.

Alternatively, it could have been struck by another body that created different interior temperature and pressure conditions, creating the two types of material.

Many of the rocks contain small blue and red "inclusions" -- material trapped in the rock during its formation -- much like a type of rare, primordial meteorites found on Earth called carbonaceous chondrites.

"This material is primitive material -- it's the very first material of the solar nebula," or the cloud of interstellar dust and gas that formed the planets of our system, said Jaumann.

Hayabusa2, which set off from Earth in 2014 and itself touched down twice on the asteroid's surface, most recently in July, will arrive home next year carrying samples for analysis in the lab.

MASCOT's observations provide, for the first time, information on the material's original geologic context, including how it is exposed to temperature changes and how it is "weathered" in space.

"We don't know how planets formed in the beginning," said Jaumann.

A dust mystery, and a future threat?

MASCOT also presented scientists with a new mystery: its lack of fine particles, or interplanetary dust, which would normally accumulate through millions of years of space weathering.

The paper offered theories but no definitive conclusions.

The dust might have fallen into tiny holes in Ryugu's surface when the asteroid was struck by other bodies.

Alternatively, temperature changes could have resulted in an electrostatic force that expelled the dust into space. Or water might once have existed on Ryugu, and its evaporation would have carried away the smaller particles.

There's another reason to study asteroids: humankind's survival could one day depend on it.

Ryugu's orbit places it mainly between Earth and Mars. Though it comes close, it's not thought to pose a danger to us, but other asteroids could.

If their composition is like Ryugu's, trying to take them out with a missile would probably just break them into smaller rocks still headed toward Earth.

One possibility would be to build a large, reflective solar sail and place it on the asteroid's surface, so that the pressure from solar radiation would gradually alter its course, said Jaumann.

Whatever strategy is adopted, he and other astronomers say it's clear these small, enigmatic bodies are of not-so-small importance in our solar neighborhood.