Sci-fi writers have dived into the possibility of not just reaching Mars but sustaining life on there too. 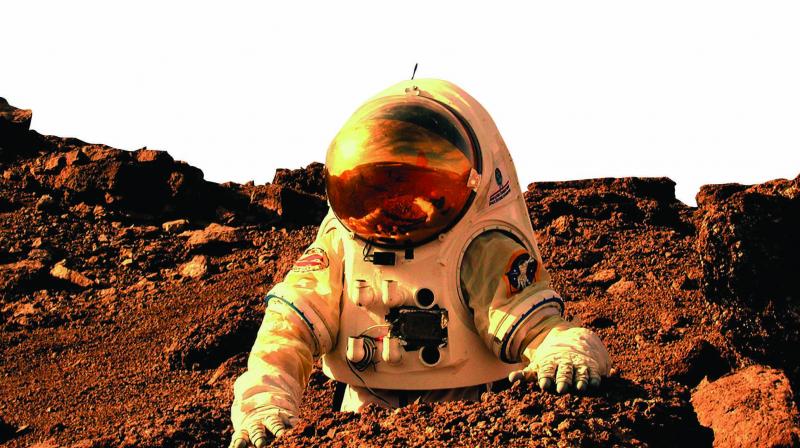 Mars has been identified as the only other planet where human beings can presently settle, as there has been evidence of ice water

With the success of Mangalyaan, documented in the upcoming film, Mission Mangal, India has set its eyes towards the final frontier. And, as the possibility of colonising Mars dawns upon us, we wonder, do Indians fancy the idea of becoming Martians?

Earth is as good as under siege. With the mounting concerns of irreversible global warming, the previously science-fictional idea of living on the Red Planet does not seem all that inconceivable anymore.

India has been taking steps in that direction: In September 2014, the country successfully launched the Mars Orbiter Mission, also known as Mangalyaan, which was the first time an Indian spacecraft covered a distance of about 225 million kilometres and reached Mars. Recently, the Indian Space Research Organisation (ISRO) also announced that there are plans in place to send another spacecraft to Mars.

Presently, Akshay Kumar’s Mission Mangal is set to hit the screens, meant as an ode to India’s achievement of reaching Mars both swiftly and at an unbelievably low cost. The film is based on true events, right from the conceptualisation phase to the actual success of the mission. An interesting fact to note is that the film’s budget was 50 crores more than that of the Mangalyaan project.

Sci-fi writers have dived into the possibility of not just reaching Mars but sustaining life on there too. In real life, the efforts of Elon Musk, Founder of SpaceX, have had a significant role to play in realising this vision. Musk’s Falcon family of rockets have not only made space exploration reasonable (as the company is able to reuse parts), but they are well in the direction of putting many people in space in the near future.

Mars has been identified as the only other planet where human beings can presently settle, as there has been evidence of ice water. Apart from this, the temperature and sunlight found there bear resemblance to the climate at Earth. But there is a difference in oxygen and gravity levels, which make for the deterrents. Moreover, Martian soil contains high level of toxins, which could adversely affect people.

The burning question, despite India’s achievements, is whether human beings would be interested to move to Mars if life became inaccessible here and if the human mind could become capable enough to simulate Earth’s conditions. Shriya Sachdeva, a postgraduate student, opines, “The dear Red Planet is the only one except Earth to house evidence of life support. The recent situation of Earth makes it unsuitable for to us to survive here for too long. Being a person with breathing problems, a whole new planet with clean and new environment (although artificial) would be a blessing.”

Ambar, also a graduate, feels that colonising Mars wouldn't be a bad thing. He says, “It gives us another place to survive. This will give us more opportunities to carry out experiments that would otherwise be impossible or unsafe on Earth.”

Pankaj Jha, a physics professor, too seems ecstatic about the possible colonisation of Mars. He says, “It would be a great thing for human evolution to be on the Red Planet. There is nothing greater than that.” He then expresses that we do, however, have to take into account the immense challenges that come with such an endeavour. Before even landing on the planet, there are things that need to be considered.

One is the lack of gravity and oxygen. To which he comments, “The last mission to Mars had given immense hope that there is great potential of life. There was evidence of water and the chances of oxygen being there is also high.” Of course, to harness these forces is another challenge. Although great hope lies in Mars, the planet still needs to be explored thoroughly and that may take years to do.

We’re actually closer to space exploration than we think. A new wave of tourism is fast emerging, where people, other than exploring places on Earth, will see what it’s like to visit outer space or another planet. Virgin Galactic is one such company that has already sold hundreds of tickets —though, for up to a quarter-of-a-million each — to potential space tourists.

Just the thought of life beyond Earth is enough to fill one with wonderment. Who knows, there might just be a day when we’ll be able to say hello to an alien? And it will respond, “Greetings Earthling!”