Isro unveils robot who will travel to space 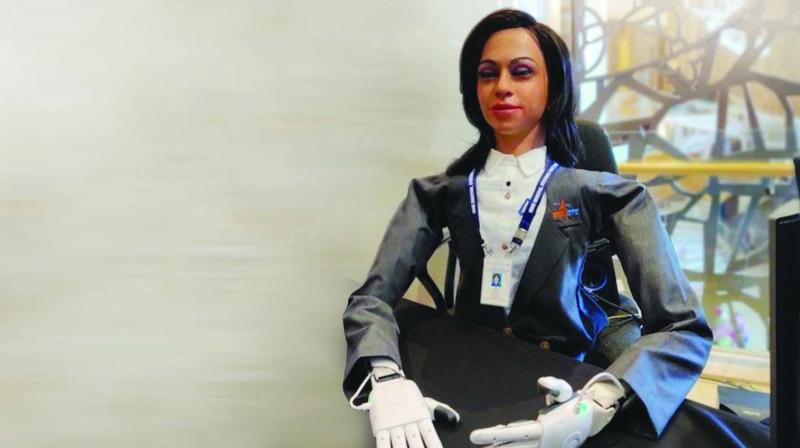 The half-humanoid robot, ‘Vyom Mitra’, is capable of conversing with astronauts, recognising them, and responding to their queries.

Bengaluru: Isro on Wednesday unveiled Vyom Mitra, a ‘half humanoid’. Vyom Mitra gets her name from two Sanskrit words — Vyom meaning Sky; Heaven in Sanskrit and Mitra, meaning friend. She will fly on board the first two “unmanned” flights of the mission. Only the third Gaganyaan flight will have a human crew.

“Vyom Mitra” spoke haltingly about her abilities to perform life support operations or respond to queries as she waved her robotic arm, but she was undoubtedly the piece de resistance when unveiled to astronauts, experts from top space-faring nations and specialists in aerospace medicine in Bengaluru.

The prototype of the humanoid, scheduled to ride into space later this year or next year ahead of the Indian crew as part of ‘Gaganyaan’ programme, is designed at Vikram Sarabhai Space Centre (VSSC), Thiruvanantha-puram.

“ I can monitor few module parameters and alert you, and perform life support operations. I can be your companion, recognise the astronauts and respond to their queries,” she said at the inaugural of a three-day international meet — Human Spaceflight & Exploration: Present challenges & future trends.

According to scientists, ‘Vyom Mitra’ will mimic all activities of ‘Gaganauts’ (Indian crew), including some simple experiments during the journey into space and back to terra firma while keeping in constant touch with Isro’s command & control facility.

Along with Vyom Mitra, GSLV (Geosynchronous Satellite Launch Vehicle), modified to hold the orange capsule with three crewmembers, was also on display.

Four men — all pilots from the Indian Air Force — have been picked for the ‘Gaganyaan’ mission. They will be trained in Russia and India over the next two years with experts to monitor their health during the arduous training schedule. The Isro will also turn to France for training in life support and related systems.

During his address at the inaugural session of this international symposium, Dr K. Sivan, chairman, Isro, told the delegates his organisation would dip into the talent and expertise available with the armed forces, DRDO labs, academia, India Inc, and well-known R&D facilities. He said ‘Gaganyaan’ not only aims at India’s maiden human flight to space but also set up a new space station for ‘continuous space human presence’.

“We are doing all this (Gaganyaan) on three points — short term plan of two unmanned mission in December 2020 and June 2021, followed by human space flight demonstration in December 2021. We have the mid term goal of sustaining the human space programme and continuous space human presence in space on a new space station,” he added.

In this regard, the Isro has initiated a full-fledged astronaut training facility in close proximity to Bengaluru for meeting future requirements. The space scientists are in talks with Nasa and other space agencies and industries on how they could collaborate on human space flight and learn from their experience. Besides,’Gaganyaan’ would also support Isro’s longterm goal of an interplanetary mission. “Inter-planetary mission is also on the agenda in the long term,” he said.

Dr Sivan also said that Isro has developed and demonstrated key technologies such as having an operational launcher with a 10-tonne payload capability to lower orbit, demonstration of mission design and management, and recovery system like space-qualified parachutes.

“The only missing element was human life science and life support system, which we are developing now,” he added.