Millions of people watched the first coast-to-coast total eclipse in the United States in nearly a century. 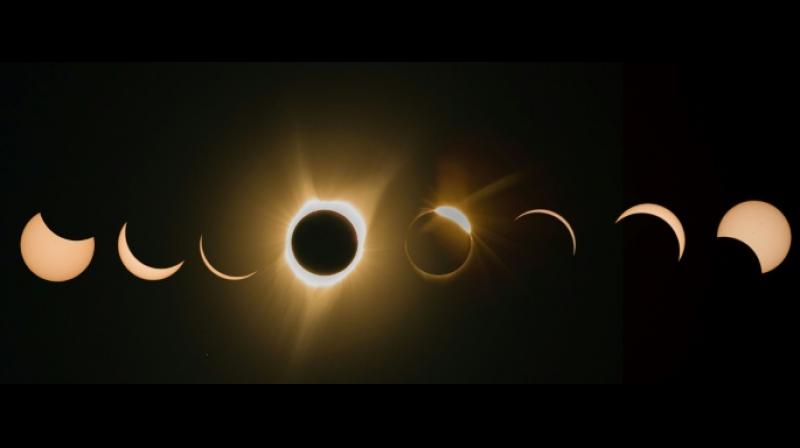 Phases of Monday's total solar eclipse as seen in Madras, Oregon, among the first places to experience the celestial phenomenon. (Photo: AFP)

As if a solar eclipse was not enough, the moon threw some virtual shade at the sun on Twitter on Monday, as millions of people watched the first coast-to-coast total eclipse in the United States in nearly a century.

"HA HA HA I've blocked the Sun!" wrote NASA Moon (@NASAMoon) on its verified Twitter account, which was created by the National Aeronautics and Space Administration. "Make way for the Moon. #SolarEclipse2017."

The tweet was accompanied with a screenshot photo showing that the moon had blocked the verified Twitter profile of NASA Sun & Space (@NASASun). The sun's response was swift.

Tens of thousands of Twitter users liked the exchange and many social media users responded with amusement.

"This is just too perfect. Congratulations. You have won the entire internet," user Andy Stein (@MandoPony) replied.

"I feel the moon is gonna get some licks in but the sun is gonna come out on top," wrote another user, @GeeInTheNorth.

Some users exacerbated the spat online, using GIFs of celebrities applauding and toasting to the moon, while some accused it of being petty and demanded that the sun respond.

After weeks of anticipation, the sight of the moon's silhouette blotting out all but a halo-like corona of the sun drew whoops and cheers from onlookers when it began over the West Coast on Monday.