The species of ankylosaur was a squat plant-eater that roamed southern Utah on four legs about 76 million years ago. 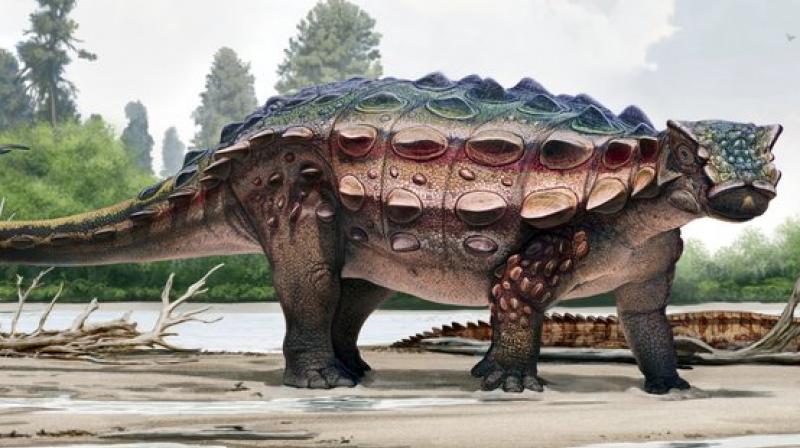 It was about as long as a large alligator and stood at a height that would have been about waist-high for a tall human. (Photo: AP)

A dinosaur that was covered in bony armour from its spiky head to its clubbed tail has been unveiled at a museum in Utah.

The species of ankylosaur was a squat plant-eater that roamed southern Utah on four legs about 76 million years ago, during the late Cretaceous Period. At that time, the desert state was hot and humid, covered with slow-moving streams and rivers as well as large conifer trees, palaeontologist Randall Irmis said.

It was about as long as a large alligator and stood at a height that would have been about waist-high for a tall human. It likely used its distinctive clubbed tail and armour for protection, though they could also have been used for display.

The fossil unveiled Thursday at the Natural History Museum of Utah was first discovered in 2008 in the Grand Staircase-Escalante National Monument, a rich dinosaur repository in southern Utah.

The fossil was discovered on the Kaiparowits Formation, a thick layer of sandstone that also has vast coal reserves inside a sprawling national monument that was one of two President Donald Trump ordered downsized last year. The spot where the fossil was found remains within Grand Staircase-Escalante boundaries, though areas that are now outside the boundaries also have fossil potential, Irmis said.

Researchers were expecting it to have smooth bony armour on its skull like other North American ankylosaurs, but were surprised to find evidence that it instead had spiky armour on its head and snout, similar to fossils found in Asia.

Palaeontologists believe the animals migrated to North America several times over the eons when lowered sea levels allowed them to cross a land bridge.

The species was dubbed Akainacephalus johnsoni to recognize Randy Johnson, a retired chemist and museum volunteer who spent hundreds of hours painstakingly freeing the skull from rock and debris.

Along with a complete skull, the fossil also includes the distinctive tail club, large parts of its spinal vertebral column and parts of its body armour, including two neck rings and spiked armour plates, the museum said in a statement.