The structure is the largest and most massive to be found so early in the formation of the Universe. 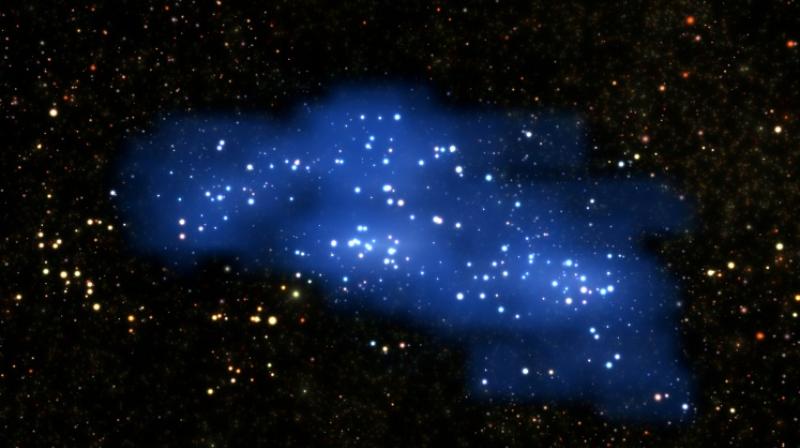 Its titanic mass is one million billion times that of the Sun.

Scientists have discovered a primitive "supercluster" of galaxies forming in the early Universe, just 2.3 billion years after the Big Bang. The structure, nicknamed Hyperion, is the largest and most massive to be found so early in the formation of the Universe, which sprang into existence around 13.7 billion years ago. Its titanic mass is one million billion times that of the Sun.

"This is the first time that such a large structure has been identified at such a high redshift, just over two billion years after the Big Bang," said Olga Cucciati, a researcher at the Astrophysics and Space Sciences Observatory in Bologna and lead author of a study detailing the discovery. Redshift is a measure of the changing wavelength of light travelling away from an observer.

"Normally these kinds of structures are known at lower redshifts, which means when the Universe has had much more time to evolve and construct such huge things," Cucciati said.

Located in the constellation of Sextans (The Sextant), Hyperion was identified by analysing the vast amount of data obtained from the VIMOS Ultra-deep Survey, which provides a unique 3-D map of how more than 10,000 galaxies are distributed in the distant Universe.

Hyperion is similar in size to nearby superclusters, though it has a very different architecture, the researchers said. The findings were published in the journal Astronomy & Astrophysics.

"Superclusters closer to Earth tend to have a much more concentrated distribution of mass with clear structural features," explains co-author Brian Lemaux, an astronomer from the University of California at Davis.

"But in Hyperion, the mass is distributed much more uniformly in a series of connected blobs populated by loose associations of galaxies."

This contrast is most likely due to the fact that nearby superclusters have had billions of years for gravity to gather matter together into denser regions — a process that has been acting for far less time in the much younger Hyperion. Over time, Hyperion will likely evolve into something like the Virgo Supercluster, which contains our own galaxy, the Milky Way.