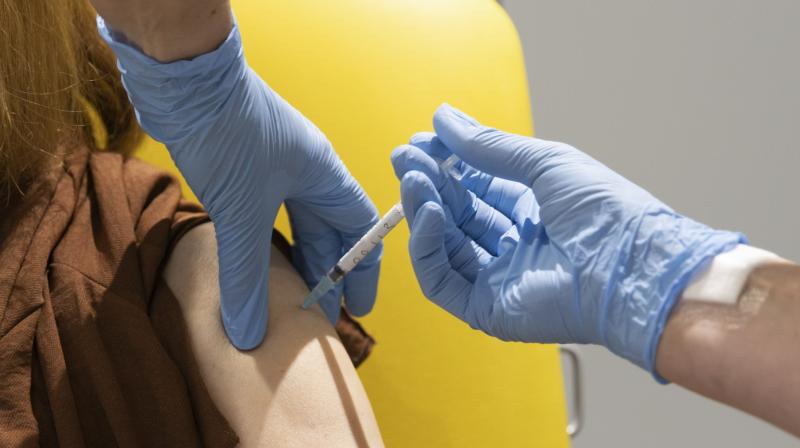 Scientists at Oxford University say their experimental coronavirus vaccine has been shown in an early trial to prompt a protective immune response in hundreds of people who got the shot. In research published Monday July 20, 2020 in the journal Lancet, scientists said that they found their experimental COVID-19 vaccine produced a dual immune response in people aged 18 to 55. (University of Oxford via AP)

Los Angeles: Two potential vaccines to protect against the novel coronavirus - one from Oxford University and AstraZeneca Plc and the other from China’s CanSino Biologics - induced immune responses in healthy volunteers without causing dangerous side effects, according to studies published on Monday in The Lancet.

A third different type of vaccine from Pfizer Inc and German biotech BioNTech also showed promise in a small, early study released on Monday, adding to hopes that at least one will prove safe and effective.

The following are five takeaways from Monday’s developments, drawn in part from an editorial in The Lancet medical journal:

1. The Oxford/AstraZeneca and CanSino teams released results from early trials of COVID-19 vaccines that use harmless versions of another virus, or viral vector, to deliver genetic material from the novel coronavirus into cells to generate an immune response. Both trials were primarily designed to test the vaccines’ safety and provide potential hints of efficacy. Subjects in both studies experienced mild side effects such as fever and injection site pain, but no severe adverse events were reported. Vaccines are traditionally made by using a weakened or inactivated form of the virus to elicit an immune response and prevent infection, but those vaccines are not easy to develop quickly. Viral vector vaccines do not need to be frozen, although they do need to be refrigerated. Johnson & Johnson’s vaccine against the Ebola virus on July 1 became Europe’s first approved viral vector vaccine.

2. The COVID-19 pandemic has fast-tracked other new types of vaccine technology. The Pfizer and BioNTech candidate, which had initial data from a German study in 60 healthy volunteers, was shown to prompt an immune response and was well-tolerated. The data were in line with those from another early-stage U.S. trial released earlier this month.. That vaccine uses a different novel platform - ribonucleic acid (RNA) - the chemical messenger containing instructions for cells to produce proteins. RNA vaccines are designed to work by instructing cells to make proteins that mimic the surface of the coronavirus, which the body then sees as a foreign invader and learns to target with an immune response. Although the technology has been around for years, there has never been an approved messenger RNA vaccine.

3. The number of people in whom experimental COVID-19 vaccines have been tested so far is small, but researchers say measurements of immune system responses are encouraging. Still, much remains unknown about COVID-19 vaccines in development, particularly the staying power of any immune responses and effectiveness in older adults or other specific groups, including people with chronic health problems and ethnic or racial groups more severely affected by the disease. Other outstanding questions include: Will a single dose be sufficient; Do they spur enough neutralizing antibodies and T-cells, a type of white blood cell that helps the immune system destroy infection; Do T-cell responses correlate with longer-term protection; Is there a possibility that a vaccine could put someone at risk of more serious infection?

4. More than 150 possible vaccines are in development for preventing COVID-19. J&J is also developing a viral vector vaccine for coronavirus and expects to begin human trials this month. Moderna Inc last week said its experimental RNA vaccine for COVID-19 showed it was safe and provoked immune responses in all 45 healthy volunteers in an ongoing early-stage study. Moderna expects to begin large-scale testing before the end of July. Once vaccines clear early safety hurdles, they will need to be tested on thousands of subjects to assure they can be safely administered to millions or billions of healthy people.

5. Monday’s published studies bode well for those much larger, randomized controlled to assess their efficacy and safety. AstraZeneca has late-stage trials underway in the UK, Brazil and South Africa and aims to start studies in the United States, where the coronavirus prevalence is higher. Results can be accrued much more quickly in regions with high rates of active infection. AstraZeneca Chief Executive Pascal Soriot said the company hopes the vaccine will be available this year depending on how quickly late-stage trials can be completed, given the dwindling prevalence of the virus in Britain. While CanSino has yet to start large-scale clinical trials to assess how well its vaccine prevents infection, it has been approved for use in China’s military. Pfizer and BioNTech have said they expect to begin a trial later this month with up to 30,000 subjects with the aim of demonstrating vaccine efficacy.