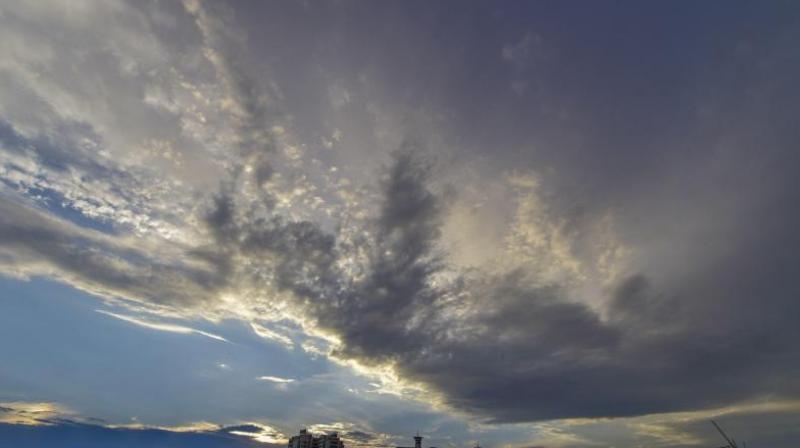 The largest uncertainty in climate sensitivity predictions is the influence of clouds. (Photo: Representational/PTI)

London: Global temperatures are likely to increase by more than 3 degrees Celsius -- double the UN climate targets -- partly due to clouds reflecting less solar radiation and enhancing the greenhouse effect, a study has warned.

The research, published on Tuesday in the journal Proceedings of the National Academy of Sciences, is the strongest evidence so far that clouds will amplify global heating over the long term, further exacerbating climate change.

The scientists at Imperial College London and the University of East Anglia in the UK employed a new approach to analyse satellite measurements of Earth's cloud cover.

Their finding suggests that at double atmospheric carbon dioxide (CO2) concentrations above pre-industrial levels, the climate is unlikely to warm below 2 degrees Celsius, and is more likely on average to warm more than 3 degrees Celsius.

Pre-industrial CO2 levels were around 280 parts per million (ppm), but current levels are approaching 420 ppm, and could approach double the pre-industrial amount by mid-century if significant emissions cuts are not made.

The amount of climate warming predicted from a doubling of pre-industrial CO2 levels is known as the 'climate sensitivity' -- a measure of how strongly our climate will react to such a change, the researchers said.

The largest uncertainty in climate sensitivity predictions is the influence of clouds, and how they may change in the future, they said.

This, according to the researchers, is because clouds, depending on properties such as their density and height in the atmosphere, can either enhance or dampen warming.

"The value of the climate sensitivity is highly uncertain, and this translates into uncertainty in future global warming projections and in the remaining 'carbon budget' -- how much we can emit before we reach common targets of 1.5 degree Celsius of global warming, said study co-author Paulo Ceppi, from Imperial College London.

"There is therefore a critical need to more accurately quantify how clouds will affect future global warming. Our results will mean we are more confident in climate projections and we can get a clearer picture of the severity of future climate change," Ceppi said.

The researchers noted that low clouds tend to have a cooling effect, as they block the sun from reaching the ground.

High clouds, however, have a warming effect, as while they let solar energy reach the ground, the energy emitted back from the Earth is different, they explained.

This energy can be trapped by the clouds, enhancing the greenhouse effect

Therefore, the type and amount of cloud a warming world will produce impacts further warming potential.

The researchers developed a new method to quantify relationships between state-of-the-art global satellite observations of clouds, and the associated temperature, humidity and wind conditions.

They found it was very likely (more than 97.5 per cent probability) that clouds will amplify global heating, by both reflecting less solar radiation and enhancing the greenhouse effect.

These results also suggest that a doubling of CO2 concentrations will lead to around 3.2 degrees Celsius of warming.

This is the highest confidence of any study so far, and is based on data from global observations, rather than local regions or specific cloud types.

"Over the last few years, there's been a growing amount of evidence that clouds probably have an amplifying effect on global warming, said study co-author Peer Nowack, from the University of East Anglia.

However, our new approach allowed us for the first time to derive a global value for this feedback effect using only the highest quality satellite data as our preferred line of evidence, Nowack added.