A radiative cooling technology could help cut energy consumption by nearly 70 per cent. 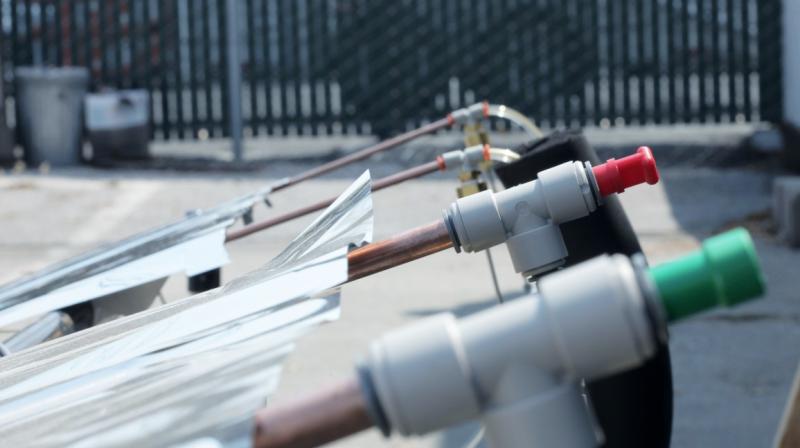 Eli Goldstein, cofounder of SkyCool Systems, showed off his new invention at his workspace in Burlingame, California. The new device looked weird, but was claiming to do something more wonderful that how it looks.

A set of square silver panels placed into his parking lot were tilted toward the sun, and covered in aluminum foil attached to a metal frame holding an array of pipes, tubes, and thermometers.

SkyCool’s new panels being shown off were some sort of high-tech mirrors, designed to cool down buildings far more efficiently than traditional air-conditioning systems. The new device does it by exploiting optics that allows a narrow band of radiation to escape into space. Depending on the application and climate conditions, the technology could be able cut down energy used to cool structures by 10 to 70 per cent.

Understanding how it works requires a bit of background. MIT Technology Review gives us the entire insides of the same.

All objects give off heat in the form of infrared radiation, an invisible form of light just to the right of red on the spectrum. The point of jackets, mittens, and scarves is to retain as much of that radiant heat as possible, keeping us warm on winter days. The atmosphere itself, mainly in the form of water molecules, also radiates back a portion of the heat.

But a sliver of emissions in the mid-infrared range (with wavelengths between eight and 13 micrometers, for those keeping score) slips through, escaping through what has been described as a “window into space.” Materials emitting radiation in that range literally cast it into the cold expanses of space, or at least the cool upper atmosphere, allowing the surfaces themselves to dip below the temperature of the surrounding air. This natural phenomenon is what causes frost to form on surfaces under the open night sky, like car windows and blades of grass, even when temperatures don’t reach freezing.

A critical challenge for harnessing this mechanism in useful ways has been that during the day, the heat from the sun generally offsets any cooling effect. But in research first published in Nature in late 2014, the scientists behind SkyCool Systems got around that problem by developing an advanced material tuned to radiate infrared light in the range that slips through the atmosphere while also reflecting away 97 percent of sunlight. Placed on a roof under direct sunlight, the material remained 4.9 ˚C below ambient air temperatures, a “cooling power of 40.1 watts per square meter.”

Three of the researchers involved in this work cofounded SkyCool Systems last spring in an effort to commercialize the technology. Goldstein is the startup’s chief technology officer; Aaswath Raman, lead author of the original paper and one of MIT Technology Review’s “35 Innovators Under 35” in 2015, serves as chief executive; and Shanhui Fan, a Stanford professor of electrical engineering, acts as an advisor.

Last week the researchers published a follow-up paper in Nature Energy, demonstrating that a scaled-up version of the technology can be used to cool flowing water. By setting up panels with thin water pipes running directly beneath them, the researchers lowered the temperature of water by 5 ˚C over three days of testing. The result suggests that the technology can be incorporated into existing cooling mechanisms by replacing or augmenting the condenser component used in conventional air-conditioning and refrigeration. Through modeling, the researchers showed that integrating the technology into a two-story office building in Las Vegas would cut the electricity demands of cooling by 21 percent during the summer.

The ability to retrofit the system into existing buildings, lowering costs for owners and tenants, means the potential market is vast. About 14 percent of total U.S. energy production goes to cooling residential and commercial buildings. The Department of Energy’s moonshot ARPA-E program, which provided $3 million to the SkyCool researchers in 2012, found that advanced radiative cooling panels could cut 10 to 20 percent of that use, and reduce peak load demands on the electricity grid.

But far larger energy savings may be possible for developers who opt to incorporate radiative cooling systems directly into new buildings during the design phase, says Nick Fernandez, an energy analyst at the Pacific Northwest National Laboratory. If the system were coupled with a hydronic radiant cooling system—a rare but highly efficient way of cooling buildings that works by circulating water instead of blowing air—the energy savings for heating, cooling, and ventilation could reach nearly 70 percent in ideal climate conditions, according to a simulation analysis published in 2015, on which Fernandez was the lead author.

SkyCool isn’t the only company going after this market. In February, a team of engineers at the University of Colorado, Boulder, published a paper in Science describing a glass-polymer hybrid material that achieved “noon-time radiative cooling power of 93 (watt per square meter) under direct sunshine.” The researchers stressed that they’ve already figured out how to affordably manufacture rolls of the film-like material, “making it a potentially viable large-scale technology for both residential and commercial applications,” according to a university publication.

Like the Stanford team, the CU Boulder researchers raised money from ARPA-E, applied for a patent, and formed a company, Radi-Cool. The scientists are in talks with potential investors and manufacturers, says Ronggui Yang, a professor of mechanical engineering, who is a coauthor of the paper and acting CEO of the startup.

SkyCool's researchers, who have secured a limited amount of additional federal and private funding, continue to improve the efficiency of the advanced materials. Raman, the startup’s CEO, declines to discuss eventual product pricing, but he believes that any up-front costs will be offset by long-term energy savings. If a rooftop radiator of the type SkyCool is developing could be produced and installed for less than 58 cents per square foot, the energy savings would cover those costs in about five years, the Pacific Northwest Lab study estimated.

The company is carrying out a field trial of its latest generation of panels in Davis, California, about two hours away from Burlingame in the Central Valley, evaluating the technology as a way to augment both air-conditioning and commercial refrigeration systems.

SkyCool’s next major milestone will be a large-scale demonstration with an early customer or partner, which Raman and Goldstein hope to begin next year. They are targeting businesses with large cooling needs, such as supermarkets and data centers, where any energy savings add up fast. Talks with potential clients have already begun.