Trials for vaccine against Covid19 begins 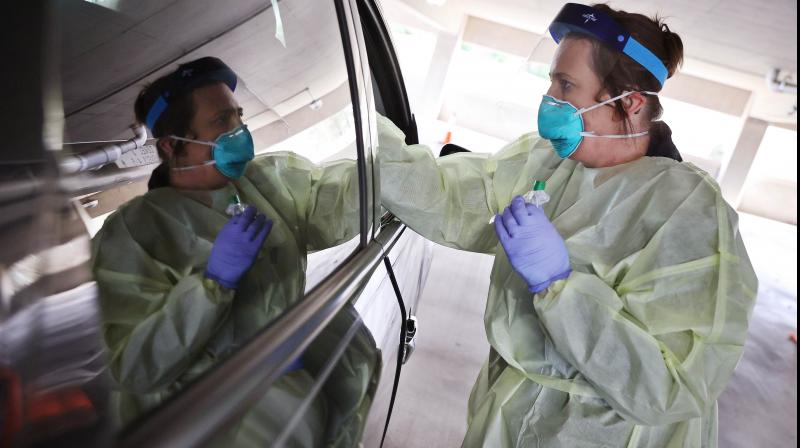 Washington: Supported by a global coalition founded by India and Norway, the US has begun the phase one clinical trial of an investigational vaccine designed to protect against the coronavirus disease which has claimed the lives of over 7,000 people globally.

The trial began at the Kaiser Permanente Washington Health Research Institute (KPWHRI) in Seattle as the first participant received the investigational vaccine.

"I'm pleased to report today that a vaccine candidate has begun the phase one clinical trial. This is one of the fastest vaccine development launches in history. Not even close. We're also racing to develop antiviral therapies and other treatments," Trump told reporters at a White House news conference on Monday.

"This Phase 1 study, launched in record speed, is an important first step towards achieving that goal," he said.

According to the NIH, the study is evaluating different doses of the experimental vaccine for safety and its ability to induce an immune response in participants. This is the first of multiple steps in the clinical trial process for evaluating the potential benefit of the vaccine.

The vaccine is called mRNA-1273 and was developed by the NIAID scientists and their collaborators at the biotechnology company Moderna, Inc., based in Cambridge, Massachusetts.

The Coalition for Epidemic Preparedness Innovations (CEPI) supported the manufacturing of the vaccine candidate for the Phase 1 clinical trial, the NIH said.

Conceived in 2015, CEPI was founded in Davos in 2017 by the governments of Norway and India, the Bill & Melinda Gates Foundation, the Wellcome Trust, and the World Economic Forum.

According to its website, CEPI so far has secured USD 760 million toward its USD 1 billion funding target, with multi-year funding from Norway, the UK, Germany, Japan, Canada, Ethiopia, Australia, the Bill & Melinda Gates Foundation, and Wellcome.

Among its 12 voting members are Cherry Gagandeep Kang from Christian Medical College Vellore and Rajeev Venkayya Vaccine Business Unit, Takeda Pharmaceutical Company Limited. Indian Soumya Swaminathan is a non-voting member and represents the World Health Organization (WHO) in the Board.

Early this week, CEPI, the organisation set up to accelerate the development of vaccines against emerging infectious diseases, made an urgent call for USD 2 billion to support the development of a vaccine against the virus responsible for COVID-19.

In a statement, the NIH said that infection with SARS-CoV-2, the virus that causes COVID-19, can cause a mild to severe respiratory illness and include symptoms of fever, cough and shortness of breath.

The number of deaths due to coronavirus has passed 7,000 worldwide. More than 175,530 cases have been recorded in 145 countries.

COVID-19 cases were first identified in December 2019 in China's Wuhan in Hubei province. As of March 15, the WHO has reported 153,517 cases of COVID-19 and 5,735 deaths worldwide. More than 2,800 confirmed COVID-19 cases and 58 deaths have been reported in the United States as of March 15, according to the Centers for Disease Control and Prevention (CDC).

The investigational vaccine directs the body's cells to express a virus protein that, it is hoped, will elicit a robust immune response. The mRNA-1273 vaccine has shown promise in animal models, and this is the first trial to examine it in humans, it said.

The Phase 1 trial is led by Lisa A Jackson, MD, senior investigator at KPWHRI. Study participants will receive two doses of the vaccine via intramuscular injection in the upper arm approximately 28 days apart. Each participant will be assigned to receive a 25 microgram (mcg), 100 mcg or 250 mcg dose at both vaccinations, with 15 people in each dose cohort, according to a statement.

"This work is critical to national efforts to respond to the threat of this emerging virus. We are prepared to conduct this important trial because of our experience as an NIH clinical trials center since 2007," Dr Jackson said.