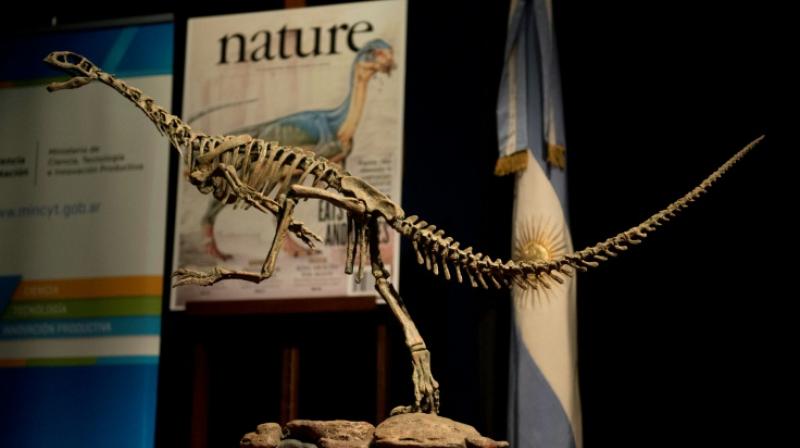 An oddball, vegetarian dinosaur with the silhouette of a flesh-ripping velociraptor, whose fossilised remains were unearthed in southern Chile 13 years ago, is a missing link in dino evolution, researchers said.

A revised assessment of the kangaroo-sized Chilesaurus, reported in the journal Biology Letters, bolsters a theory unveiled earlier this year that threatens to upend a long-standing classification of all dinosaurs.

Dinosaurs were the monarchs of Earth for 160 million years until a space rock collided with the planet 65.5 million years ago and wiped out those confined to land.

The survivors, which could fly, are the direct ancestor of today's birds.

When first presented to the world in 2015, Chilesaurus -- despite its penchant for plants -- was lumped together with theropods, the suborder of meat-eating dinos that not only includes fleet-footed velociraptors but Tyrannosaurus rex, the ultimate carnivore.

Experts acknowledged at the time, however, that it was an awkward fit. One described the beast as "the most bizarre dinosaur ever found."

An upright posture, powerful hind legs and foreshortened front limbs were all reminiscent of theropods.

But an inverted, bird-like hip structure and flattened, leaf-shaped teeth -- proof of an exclusively vegetal diet -- suggested that it also shared traits with another major suborder, the Ornithischia.

Well-known ornithischians include Triceratops and the three-tonne Stegosaurus, which boasted large armoured plates along its spine and a brain the size of a walnut.

"Chilesaurus initially looked like an earlier offshoot of the theropod line, but it seemed suspicious that it had all these adaptations for eating plants," Barrett told AFP.

It lived about 150 million years ago, far earlier than the handful of theropods known to have turned away from meat, he pointed out.

To verify Chilesaurus' place in the dino family tree, Barrett and Matthew Baron of the University of Cambridge analysed more than 450 anatomical features of early dinosaurs.

What they found confirmed a hunch.

"We realised that it was not a strange, early plant-eating theropod, but rather a strange plant-eating animal that was an offshoot of this other group, Ornithischia," Barrett said.

Reassigning Chilesaurus to a new family tree might seem like something only a dino lover could find exciting.

But the new affiliation has major implications.

For most of the last century, experts have agreed that theropods were more closely related to a third major evolutionary branch, the Sauropods, that included long-necked beasts such as Diplodocus and Brachiosaurus.

But the neither-fish-nor-foul Chilesaurus shows that the fearsome killers under the theropod umbrella shared, in fact, a greater affinity with the docile Ornithischia menagerie.

This was the bold theory that Baron and Barrett, along with other colleagues, proposed in a landmark study published last March in the journal Nature.

"Our reorganisation was putting Ornithischia and theropods much closer together, and this new animal helps cement that relationship," Barrett explained.

"Chilesaurus gives us more confidence that this rearrangement was correct because it has a combination of features found in those two groups."

The first dinosaur emerged some 228 million years ago. The new findings support the idea that theropods and ornithischians shared a common ancestor as early as 225 million years ago, not long after the dino saga began.

Ornithischia thrived for more than 100 million years, but dead-ended when the rogue rock smashed into what, today is the Yucatan peninsula in Mexico.

The impact probably created a massive firestorm followed by a decades-long winter that destroyed vegetation, the starting point in the dinosaurs' food chain.

Most theropods were wiped out too, although the forerunners of modern birds persevered.