The mission was stopped 56 minutes and 24 seconds before lift-off at 1.55 am following an announcement from the Mission Control Centre. 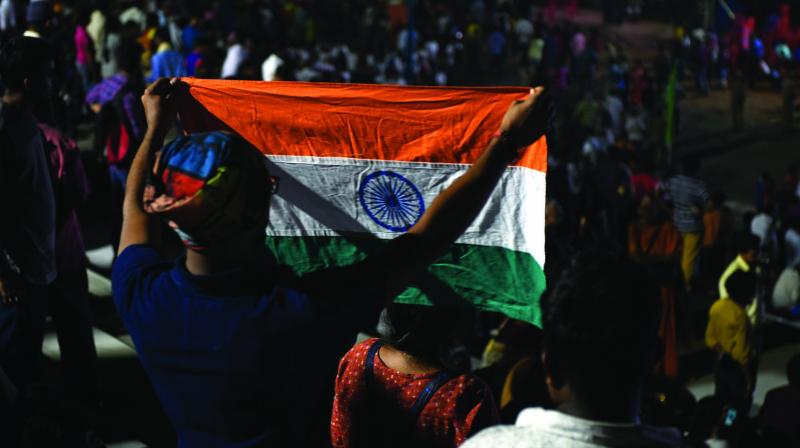 A spectator holds the tricolour after the Chandrayaan-2 mission was called off in Sriharikota early on Monday morning. (Photo: AFP)

Sriharikota Range: A “technical snag” in its most powerful rocket, a little less than an hour before launch from a spaceport here in the early hours of Monday forced a hold on the launch of India’s much-vaunted second lunar probe, Chandrayaan-2 on the GSLV MkIII rocket’s flight.

A new date for the launch will be announced as soon as a committee of experts identify the rogue component that caused mission control at Satish Dhawan Space Centre (SDSC), Sriharikota Range, to abort the launch, minutes before the launch on discovering a leak of Helium from the cryogenic upper stage of the rocket. The Isro was tightlipped as to what may have caused the glitch that occurred when liquid propellant was being loaded into the rocket’s indigenous cryogenic upper stage engine but sources confirmed to this newspaper that a suspected leak of Helium caused Isro to call off the launch to the ambitious Rs 976 crore lunar mission.

The countdown to the launch of Chandrayaan-2 on board Geosynchronous Launch Vehicle GSLV-Mk-III, dubbed as ‘Baahubali’, was scheduled for 2.51 am. The mission was stopped 56 minutes and 24 seconds before lift-off at 1.55 am following an announcement from the Mission Control Centre. Confusion prevailed for several minutes before the Isro came out with an official confirmation about the launch being cancelled. “A technical snag was observed in the launch vehicle system at t-minus 56 minutes. As a measure of abundant precaution Chandrayaan 2 launch has been called off for today,” Isro associate director (Public Relations) B.R. Guruprasad said, even as the moon, the target of Chandrayaan-2, played hide and seek behind sparse clouds over this space port where President Ramnath Kovind was present to witness the launch. Sources in Isro told this newspaper, that a pre-dawn review meeting about the snag was chaired by Dr K. Sivan, chairman, Isro, where a decision was taken to set up a committee to identify the malfunctioning component in the cryogenic upper stage of the rocket. This committee, however, would be able to commence its probe only after draining the tons of fuel over the next two days.

“The experts must be able to reach the upper stage of the launch pad, and find out what caused the leak of Helium. In case this is not possible, the rocket will be moved back from the launch pad to the assembly facility. Dr Sivan and other top scientists will meet again to study the report,” sources added.

Sources said though Dr Sivan originally hinted about the possibility of a launch on July 16 in case of a snag it would not be possible because of a very brief launch window on Tuesday of just over a minute, and the fact that a number of tests and dry runs are essential before announcement of the launch date.

Billed as the most complex and prestigious mission ever undertaken by  ISRO since its inception, Chandrayaan-2 would have made India the fourth country to soft land a rover on the lunar surface after Russia, the United States and China.