Recent research on hominin teeth has shown that while size varied greatly across various human species. 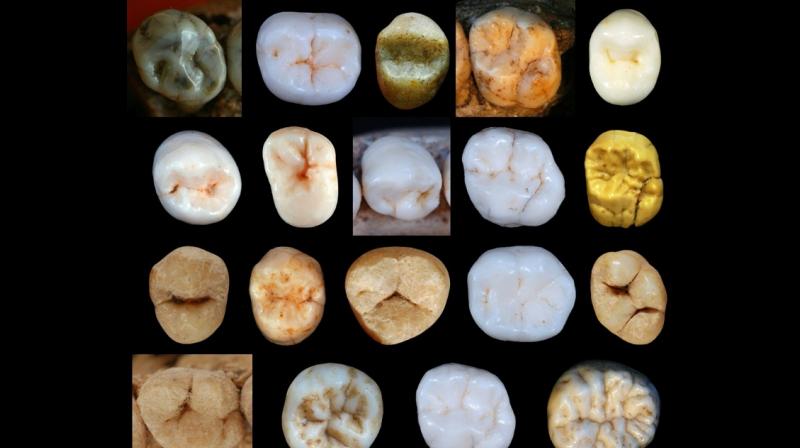 The study by Aida Gomez-Robles from University College London proposes that the two species' last common ancestor may have lived 800,000 years ago, entering a debate that is hotly contested among anthropologists.

Scientists seeking to unlock the mysteries of human evolution have in recent years relied on increasingly sophisticated DNA techniques that provide "molecular clocks" to date the remains of our ancient ancestors.

But a new analysis that instead examines fossil teeth provides an alternative approach -- and one which yields a significantly earlier date for the divergence between modern humans and Neanderthals.

The study by Aida Gomez-Robles from University College London proposes that the two species' last common ancestor may have lived 800,000 years ago, entering a debate that is hotly contested among anthropologists.

The new timeline is between 200,000 to 400,000 years earlier than current estimates, and if correct would rule out Homo heidelbergensis, another extinct human species, as the last common ancestor between Homo sapiens and our nearest relatives the Neanderthals, as some scientists presently posit.

According to Gomez-Robles, whose paper was published in Science Advances on Wednesday, recent research on hominin teeth has shown that while size varied greatly across various human species, the shape of teeth was more homogeneous and evolved at stable rates across the board.

She examined the molars and pre-molars of around 30 fossils thought to be early Neanderthals from the Sima de los Huesos cave site in Spain as well as of seven other extinct hominin species in order to determine how much they changed over time.

A 2014 study using luminescence techniques and palaeomagnetism was said to have reliably dated the cave site, in Spain's Atapuerca Mountains, to 430,000 years ago, which already hinted that sapiens and Neanderthals went their separate ways before this time.

Using computer modeling, she found that early Sapiens and Neanderthals would have had to have diverged 800,000 years ago for the Sima teeth to have had time to achieve their particular features, barring strong environmental factors that caused the species to evolve at a quicker rate.

"The major implication is Homo heidelbergensis cannot be the last common ancestor between modern humans and Neanderthals," she told AFP.

The findings may not put an end to the longstanding debate, not least because of its variance with some of the DNA-based dating, which also relies on assumptions about how quickly genetics change over time.

Gomez-Robles said that while no method was perfect, studying anatomical variation "gives us a more accurate picture" partly because it is still not possible to extract DNA from most ancient fossils.

Moreover, differing timelines could point to growing body of evidence that there are no clean splits between species.

"When we are talking about the divergence between Neanderthals and modern humans, or between any two species, that is not something that happens at one specific moment of time," she told AFP.

"And something that we know today as well is that, you know, there was a hybridization between Neanderthals and modern humans" she continued. "So this is also adding noise to all these studies."

Gomez-Robles' work was praised by Mirjana Roksandic, a biological anthropologist at the University of Winnipeg who recently co-authored her own paper which described H. heidelbergensis as non-Neanderthal.

"She is pinpointing a time when Neanderthals must have moved their own way and that is a very, very significant result," said Roksandic.

"Teeth are born fossils, they carry so much information. They're just absolutely brilliant that way," she added.

The new methodology was also described as "useful" by Harvard anthropologist Bridget Alex, who nevertheless added that it raised the tension between genetic change against physical and physiological changes in evolution, which may not occur at the same rate.

But the study was criticized by Susan Cachel, a professor in human evolution at Rutgers University, who asked: "If the ancestors of anatomically modern humans and Neanderthals do not come from the taxon Homo heidelbergensis, then where do they come from? Some unknown, shadowy ancestor?"

Cachel added that "there is an astonishing amount of dental variation in living humans," which she said undercut one of the key assumptions used by Gomez-Robles' statistical model, pointing to the example of how some Native Americans have a distosagittal ridge, known as the "Uto-Aztecan premolar."

This trait "is globally very rare and geographically restricted, must have appeared within the last 15-20,000 years -- since the divergence between Native Americans and their ancestral population," she said.

"I therefore question the idea that rates of dental evolution are invariably slow."