Cobras are killers in Africa and Asia, and cause crippling social and economic burdens through the number of survivors who need amputations. 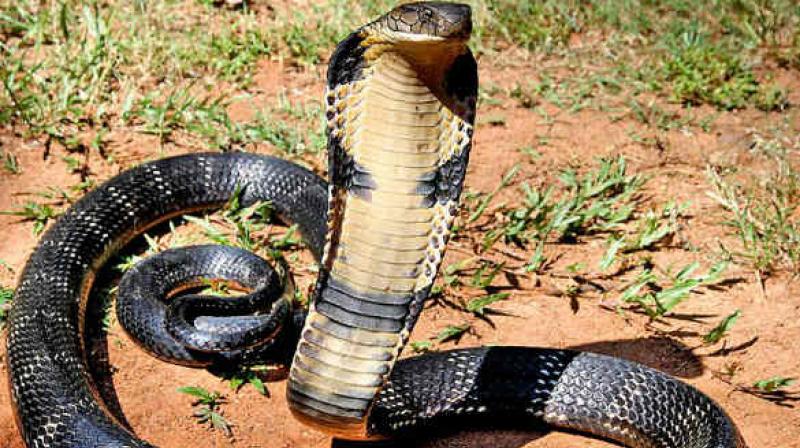 Cobras - one of the world's most feared snakes - developed its potent flesh-destroying venom along with ornately-marked broad hoods to warn off potential predators, a new study has found.

Cobras are killers in Africa and Asia, and cause crippling social and economic burdens through the number of survivors who need amputations due to the snake's flesh-eating venom.

"While we knew the results of their venom, how the cobra's unique defensive venom evolved remained a mystery until now," said Bryan Fry, associate professor at University of Queensland in Australia.

"Our study discovered the evolutionary factors shaping not only cobra venom, but also the ornate markings on their hoods, and the extremely bright warning colourings present in some species," said Fry.

The research team studied 29 cobra species and related snakes, finding that the flesh-destroying venom first evolved alongside the broad hoods that make cobras so distinctive. Further increases in the potency of toxins occurred parallel to their warning strategies such as hood markings, body banding, red colouring and spitting, Fry said.

"Their spectacular hoods and eye-catching patterns evolved to warn off potential predators because unlike other snakes, which use their venom purely for predation, cobras also use it in defence," he said.

"For the longest time it was thought that only spitting cobras had these defensive toxins in high amounts in their venoms, however we've shown that they are widespread in cobras," Fry added.

"These results show the fundamental importance of studying basic evolution and how it relates to human health," he said.

"Globally, snakebite is the most neglected of all tropical diseases and antivenom manufacturers are leaving the market in favour of products that are cheaper to produce and have a bigger market," Fry said.

"Antivenom is expensive to make, has a short shelf life and a small market located in developing countries," he said.

"Therefore, we need to do further research to see how well those remaining antivenoms neutralise not only the toxins that kill a person, but also those that would cause a severe injury," he added.

There may also be a benefit to this research in cancer treatment, said Fry. "Any kind of compound that selectively kills cells could be a good thing," he said.

"These chemicals may lead to new cancer treatments if we can find ones that are more potent to cancer cells than normal healthy cells," he added.

"Cobras are a rich resource of novel compounds in this way so there may ultimately be a silver lining to this very dark cloud," he said.