The Phoenix cluster is an enormous accumulation of about 1,000 galaxies, located 5.7 billion light years from Earth. 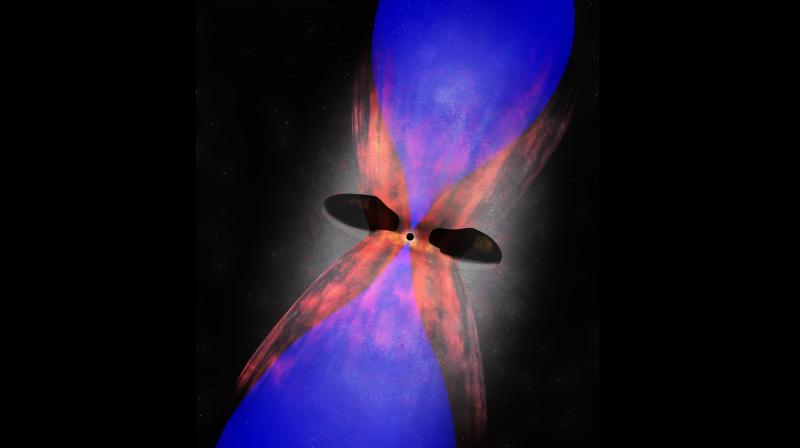 This is an artist impression of galaxy at the center of the Phoenix Cluster. (Photo: phys.org)

In a surprise finding, scientists have discovered a black hole that is recycling extremely hot gas into cold fuel for star formation.

Researchers from Massachusetts Institute of Technology (MIT) in the US and the University of Cambridge in the UK observed jets of hot, 10-million-degree gas blasting out from the central galaxy's black hole and blowing large bubbles out into the surrounding plasma.

These jets normally quench star formation by blowing away cold gas - the main fuel that a galaxy consumes to generate stars.

However, researchers found that the hot jets and bubbles emanating from the centre of the Phoenix cluster may also have the opposite effect of producing cold gas that in turn rains back onto the galaxy fuelling further starbursts.

This suggests that the black hole has found a way to recycle some of its hot gas as cold, star-making fuel.

The Phoenix cluster is an enormous accumulation of about 1,000 galaxies, located 5.7 billion light years from Earth. At its centre lies a massive galaxy, which appears to be spitting out stars at a rate of about 1,000 per year.

Most other galaxies are far less productive, squeaking out just a few stars each year and scientists have wondered what has fuelled the Phoenix cluster's extreme stellar output.

"We have thought the role of black hole jets and bubbles were to regulate star formation and to keep cooling from happening," said Michael McDonald, assistant professor at MIT.

The findings help to explain the Phoenix cluster's exceptional star-producing power. They may also provide new insight into how supermassive black holes and their host galaxies mutually grow and evolve.

The team analysed observations of the Phoenix cluster gathered by the Atacama Large Millimetre Array (ALMA) in Chile. They measured the clusters radio emissions and to detect and map signs of cold gas.

They looked through the data for carbon monoxide, a gas that is present wherever there is cold hydrogen gas.

They then converted the carbon monoxide emissions to hydrogen gas, to generate a map of cold gas near the centre of the Phoenix cluster.

"You would expect to see a knot of cold gas at the centre, where star formation happens. But we saw these giant filaments of cold gas that extend 20,000 light years from the central black hole, beyond the central galaxy itself," McDonald said.

These observations produced a picture in which powerful jets flew out from the black hole at close to the speed of light, which inflated giant bubbles in the hot gas.

When the team superimposed its picture of the Phoenix cluster's cold gas onto the map of hot gas, they found a perfect spatial correspondence: The long filaments of frigid, gas appeared to be draped over the bubbles of hot gas.

"This may be the best picture we have of black holes influencing the cold gas," McDonald said. The study was published in the Astrophysical Journal.