NASA delays deep-space Orion test to 2019 due to costs

The first test flight of NASA's Orion capsule, designed to one day carry people to Mars, has been delayed until 2019 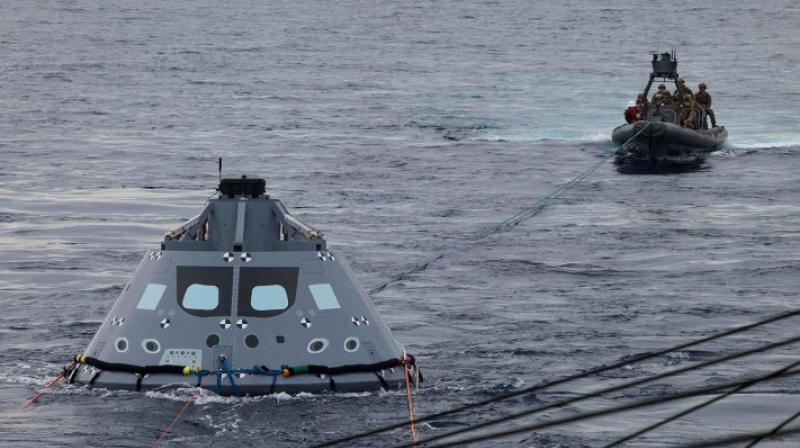 US Navy divers and other personnel practicing for recovery of Orion on its return from deep space missions, using a test version of the crew module (Photo: AFP)

The first test flight of NASA's Orion capsule, designed to one day carry people to Mars, has been delayed until 2019 at the earliest due to high costs, the US space agency said Friday.

The unmanned test flight had been scheduled for November 2018 but was pushed back after the White House asked for a feasibility study of the cost, safety and technical constraints.

NASA also decided against a proposal to add astronauts to the first mission, known as EM-1.

Instead, the space agency will stick to its original plan of putting crew on the second test mission, known as EM-2, planned for August 2021 at the earliest.

That second flight is likely be delayed beyond 2021, too, said Bill Gerstenmaier, associate administrator of NASA's Human Explorations and Operations Mission Directorate.

Concerns about containing costs, improving the heat shield on the spacecraft, and adding life support systems to the spaceship all factored into the decision, he told reporters on a conference call.

"Even though it was feasible, it just didn't seem warranted in this environment," he said.

"And then it is going to cost more, and we have the budget that we have to be considerate of and make sure we spend the minimum amount for this stuff moving forward," he added

"It's really the complexity of what we are trying to go do and build these systems."

NASA is building the world's most powerful rocket -- known as the Space Launch System (SLS) -- to propel the spacecraft to the area around the Moon and eventually to Mars.

The decision to delay the Orion test flights was made in partnership with the White House, NASA officials said.

No formal date has been set for the 2019 mission, but that should be coming in the next few months, said acting NASA Administrator Robert Lightfoot.

Manned exploration of Mars is expected to exceed $33 billion by 2033.

Speaking to astronauts at the International Space Station last month, US President Donald Trump seemed to urge NASA to hurry along its efforts to send people to Mars -- a mission currently planned for the 2030s.

"Well, we want to try to do it during my first term or at worst during my second term so we will have to speed that up a little bit ok?" Trump said, eliciting laughter from the astronauts floating in microgravity.

Lightfoot was asked by reporters Friday if the White House meant that.

"They have asked us to look at the plan we have got today and see if we can keep going on that plan," he answered.