The mission couldn't be accomplished as intended because of a technical anomaly observed in the cryogenic stage, said Dr K Sivan 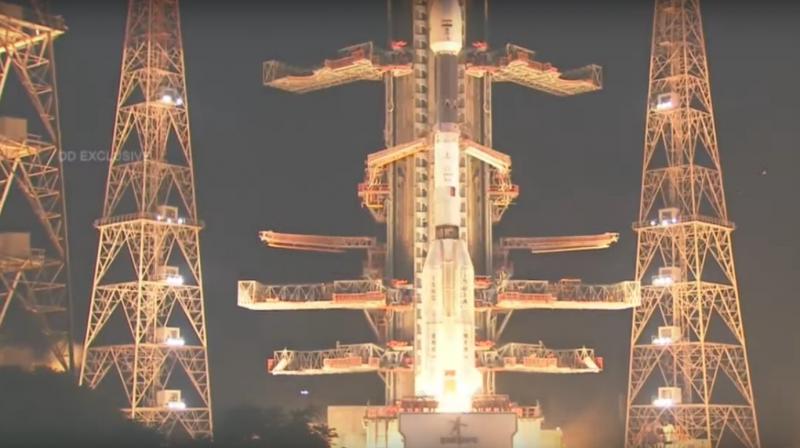 The launch, which was originally scheduled for March 5, 2020 was postponed due to technical glitches then. (Image credit: Twitter/@isro)

Nellore: It was third time unlucky for the advanced earth observation satellite EOS-03, when an Isro rocket, India’s largest launch vehicle, failed to place it in the designated orbit in space.

The third stage of the GSLV-F10 (Geosynchronous Satellite Launch Vehicle) failed to ignite after a perfect launch early on Thursday. The third stage and the satellite are now lost in space.

The EOS-03, was earlier named GISAT-1, and its first launch attempt was scrubbed hours earlier due to a technical glitch on March 5, 2020. The next launch was scheduled for March 2021, but that did not take place because of some issues with the battery of the satellite.

The 57.1-metre rocket, weighing 416 tonnes, lifted off from the second launch pad of the Satish Dhawan Space Centre, Sriharikota range, at 5.43 am on schedule. The 26-hour countdown apparently did not throw up any problem. The first two stages performed normally.

“The mission couldn't be accomplished as intended because of a technical anomaly observed in the cryogenic stage,” said Dr K Sivan, chairman of the Indian Space Research Organisation (Isro)

This was the 14th flight of the GSLV, and the eighth of the Mark 2 version that has an upper stage of an indigenous cryogenic engine that uses liquid hydrogen and liquid oxygen.

The first Mark 2 rocket had failed to reach orbit in 2010 because of a failure of the upper stage engine though the subsequent launches were successful, until Thursday.

Sources in Isro said that they would probe into the reasons for the failure.

The EOS-03 was meant to provide near real-time imaging of large areas of the region of interest at frequent intervals and for quick monitoring of natural disasters, episodic events and short-term events.

It was designed to pick up obtaining spectral signatures for agriculture, forestry, water bodies as well as for disaster warning, cyclone monitoring, cloud burst/thunderstorm monitoring etc.

Apart from the loss of the mission costing hundreds of crores, Isro will lose huge revenues during the ten-year mission life of the 2,268-kg satellite.

Meanwhile, Jitendra Singh, Union minister of state, in charge of the department of space, Tweeted: "Spoke to chairman #ISRO, Dr K Sivan and discussed in detail. The first two stages went off fine, only after that, there was a difficulty in the cryogenic upper stage ignition. The mission can be re-scheduled some time again." he said.

The failure of the GSLV-F10/EOS-03 Mission on Thursday is likely to impact Gagayaan, the human space mission, because the Indian Space Research Organisation intends to use a similar launch vehicle — the Geosynchronous Satellite Launch Vehicle (GSLV- Mk III).

Isro plans to send two unmanned missions to check the rocket and the human capsule before sending astronauts into space.

Sources in Isro said that they would pay special attention to examine all the aspects of GSLV leaving no room for any glitches before using it for Gaganyaan.

According to the sources, the crew module is under development and orders for 80 per cent of the hardware has been placed.