The spike protein of the coronavirus contains its binding site, which adheres to host cells and enables it to enter and infect the body 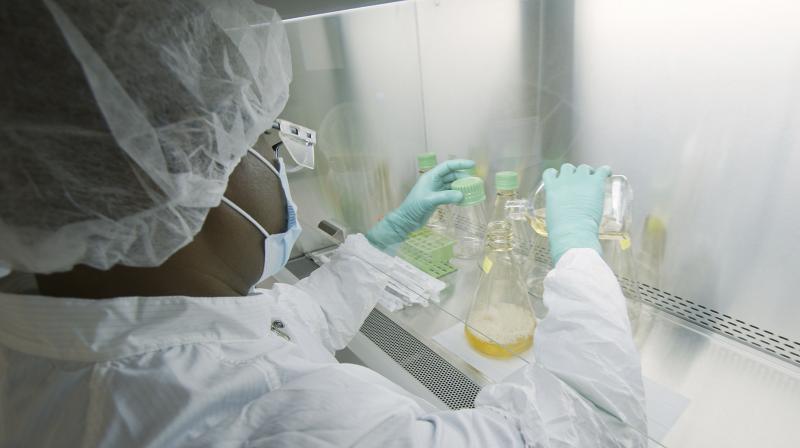 The scientists next plan to work with chemists and pharmacologists to design a new drug that could bind to the spike protein. (Representational Image: AP)

Washington: Scientists have uncovered a new vulnerability in the spike protein of the novel coronavirus, which enables the virus to enter host cells, an advance that may lead to potential treatment pathways against COVID-19.

The researchers, including those from Northwestern University in the US, noted that the spike protein contains the virus' binding site, which adheres to host cells and enables it to enter and infect the body.

In the study, published in the journal ACS Nano, they used simulations of this protein at ultrasmall scales, in the order of nanometres, and discovered a positively charged site -- known as the polybasic cleavage site -- located 10 nanometers from the actual binding site on the spike protein.

Leveraging this discovery, the scientists then designed a negatively charged molecule to bind to the positively charged cleavage site.

They said blocking this site inhibits the virus from bonding to the host cell.

"Our work indicates that blocking this cleavage site may act as a viable prophylactic treatment that decreases the virus' ability to infect humans," said Monica Olvera de la Cruz, a co-author of the study from Northwestern University.

"Our results explain experimental studies showing that mutations of the SARS-CoV-2 spike protein affected the virus transmissibility," she said.

Made up of protein building blocks, the amino acid molecules, the polybasic cleavage sites in the novel coronavirus have remained elusive since the COVID-19 outbreak began, the researchers said.

Earlier studies had indicated that these sites are essential for virulence and transmission of the virus.

In the current research, Olvera de la Cruz and her team discovered that the polybasic cleavage site is located 10 nanometers from human cell receptors -- a finding that provided unexpected insight.

"We didn't expect to see electrostatic interactions at 10 nanometers," said Baofu Qiao, lead author of the study from Northwestern University.

"In physiological conditions, all electrostatic interactions no longer occur at distances longer than one nanometer," Qiao said.

"However, it appears to be cleaved by an enzyme (furin) that is abundant in lungs, which suggests the cleavage site is crucial for virus entry into human cells," she added.

The scientists next plan to work with chemists and pharmacologists to design a new drug that could bind to the spike protein.