Science   12 Jul 2019  Watch: Supermassive black hole that should not be there
Science

Watch: Supermassive black hole that should not be there

A disk of material surrounding the black hole has been discovered by the Hubble Space Telescope. 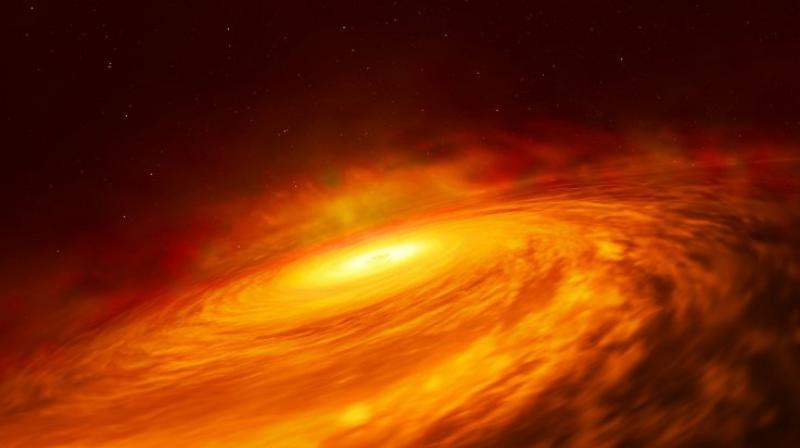 This particular black hole is 130 million light-years from Earth is not in a good shape.

The Hubble Space Telescope is a wonderful and it is excellent at spotting objects that are located in distant reaches of space. NASA and ESA, who operate the telescope have discovered a disc of material around the black hole that according to human knowledge of black holes, should not even be there. Black holes are extremely difficult to locate however, they are spotted thanks to the galaxies that surround them.

As reported by CNET, “The mysterious black hole, weighing about 250 million times more than the sun, is detailed in astronomy journal Monthly Notices of the Royal Astronomical Society, in its July 11 publication. It's puzzling astronomers because it is encircled by a thin disk, known as an accretion disk, containing debris and gas rapidly racing around the hole's edge.” And, this disk should not be there.

Black holes in certain types of galaxies like NGC 3147 are malnourished because there is not enough gravitationally captured material to feed them regularly. So, the thin haze of infalling material puffs up like a donut rather than flattening out in a pancake-shaped disk. Therefore, it is very puzzling why there is a thin disk encircling a starving black hole in NGC 3147 that mimics much more powerful disks found in extremely active galaxies with engorged, monster black holes.

Ari Laor of the Technion-Israel Institute of Technology located in Haifa, Israel explains, “We thought this was the best candidate to confirm that below certain luminosities, the accretion disk doesn't exist anymore. What we saw was something completely unexpected. We found gas in motion producing features we can explain only as being produced by material rotating in a thin disk very close to the black hole.”

Lead author Stefano Bianch says, “It's the same type of disk we see in objects that are 1,000 or even 100,000 times more luminous. The predictions of current models for gas dynamics in very faint active galaxies clearly failed."

The disk is so deeply embedded in the black hole's intense gravitational field that the light from the gas disk is modified, according to Einstein’s theories of relativity, giving astronomers a unique look at the dynamic processes close to a black hole.

Hubble clocked material whirling around the black hole as moving at more than 10% of the speed of light. At those extreme velocities, the gas appears to brighten as it travels toward Earth on one side, and dims as it speeds away from our planet on the other side (an effect called relativistic beaming).