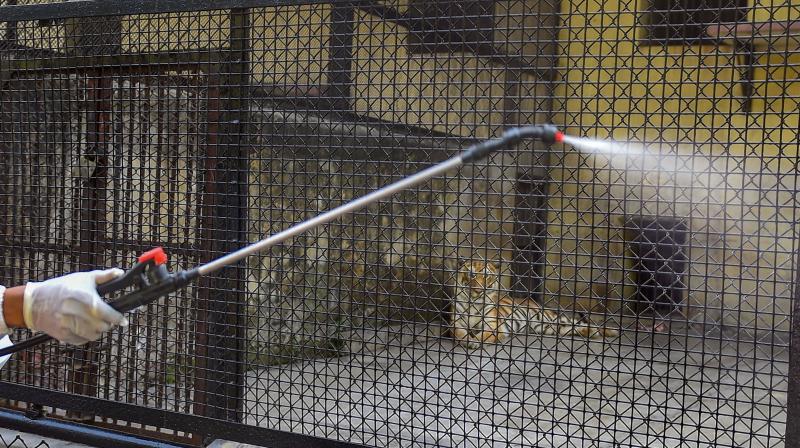 Mumbai/Bahraich: The coronavirus scare is now beginning to spread to zoos since a tiger tested positive for the virus SARS-CoV-2 (Covid-19) at the Bronx Zoo in New York.

The Maharashtra zoo authority (MZA) has asked 13 zoos, rescue centres and national parks  across the state, including Sanjay Gandhi National Park (SGNP) and the Byculla Zoo in Mumbai, to submit reports on suspected Covid-19 cases in animals by Sunday.

And the Uttar Pradesh Forest Department has begun to identify isolation enclosures and quarantine areas for wild cats in the two zoos, tiger reserves and sanctuaries in the state.

If there’s any real menace to the development reported from the Bronx Zoo, the worldwide Covid-19 pandemic is likely to acquire an altogether new dimension.

The instructions to zoos in the country came from the Central Zoo Authority (CZA) in an advisory to keep a watch on animals 24x7 for any abnormal behaviour and symptoms.

Keepers and handlers have been told not to go into the vicinity of animals without safety gear, preferably wearing Personal Protective Equipment (PPE). Also, zoos have been asked to isolate and quarantine sick animals. Keepers have been instructed to have the least contact while providing food to them.

Zoos have been asked to report any cases of animals displaying medical issues such as coughing, nasal discharge, respiratory distress, diarrhea, etc.

Zoos have been asked to keep a record of staff exiting and entering the premises and also to keep records of treatment to animals and documentation of bio-safety measures taken.

The chief conservator of forests of Uttar Pradesh Ramesh Pandey said almost half of the staff of zoos in Lucknow and Kanpur have been sent on leave and those still there have been told to maintain social distancing from animals. Those attending to animals have been asked to take precautions like using gloves, face masks and sanitisation before entering the cages.

Taking further steps the UP Forest Department has decided to identify quarantine facilities for animals should the need arise.

Pandey said soon after getting news of the Bronx zoo tiger testing positive, clear directives went out to rangers in tiger reserves and sanctuaries to maintain the highest alert.

Staff complaining of normal cold, cough or fever have been pulled from duty as well. In Katarniyaghat sanctuary, a place has already been earmarked to quarantine staff.

Animals generally have far better immunity than humans, so there are far less chances of the spread of a virus among them, but forest departkents are taking no chances.

Regular spraying of sodium hypochlorite as well as sprinkling of limestone powder and Vircon S has been taken up.

Entry to zoos, tiger reserves and sanctuaries has been restricted due to the nationwide lockdown. The Katarniaghat Wildlife Sanctuary in Bahraich district and the Dudhwa Tiger Reserve in Lakhimpur district had been closed to tourists even before the lockdown was imposed.