After assaying thousands of drugs, researchers found of the six that appear to be effective in inhibiting the enzyme 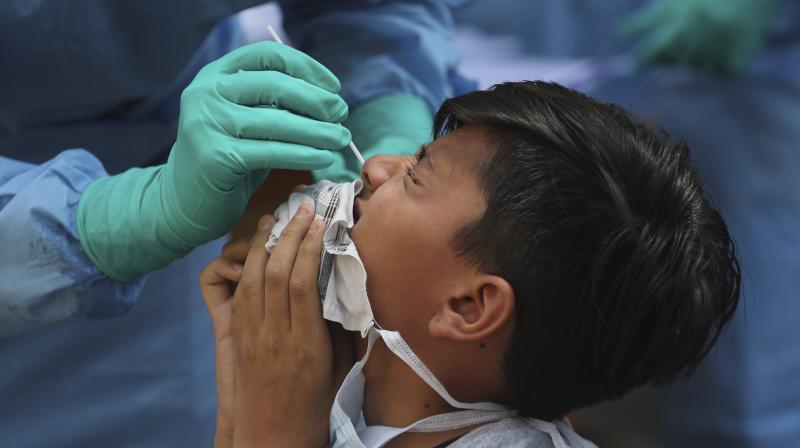 A boy reacts to a swab test during lockdown to control the spread of the new coronavirus in Ahmedabad. AP Photo

Melbourne: Scientists have identified six drug candidates from more than 10,000 compounds that may help treat COVID-19.

The research, published in the journal Nature, tested the efficacy of approved drugs, drug candidates in clinical trials and other compounds.

"Currently there are no targeted therapeutics or effective treatment options for COVID-19," said Professor Luke Guddat from the University of Queensland in Australia.

"In order to rapidly discover lead compounds for clinical use, we initiated a programme of high-throughput drug screening, both in laboratories and also using the latest computer software to predict how different drugs bind to the virus," Guddat said.

The project targeted the main COVID-19 virus enzyme, known as the main protease or Mpro, which plays a pivotal role in mediating viral replication, the researchers said.

This makes it an attractive drug target for this virus, and as people don't naturally have this enzyme, compounds that target it are likely to have low toxicity, they said.

"We add the drugs directly to the enzyme or to cell cultures growing the virus and assess how much of each compound is required to stop the enzyme from working or to kill the virus. If the amount is small, then we have a promising compound for further studies," said Guddat.

After assaying thousands of drugs, researchers found of the six that appear to be effective in inhibiting the enzyme, one is of particular interest.

"We're particularly looking at several leads that have been subjected to clinical trials including for the prevention and treatment of various disorders such as cardiovascular diseases, arthritis, stroke, atherosclerosis and cancer," Guddat said.

Researchers said compounds that are already along the pipeline to drug discovery are preferred, as they can be further tested as antivirals at an accelerated rate compared to new drug leads that would have to go through this process from scratch.

"With continued and up-scaled efforts we are optimistic that new candidates can enter the COVID-19 drug discovery pipeline in the near future," Guddat said.