Astronomers are looking for planets in the habitable zone of stars which is often called 'goldilocks zone'. 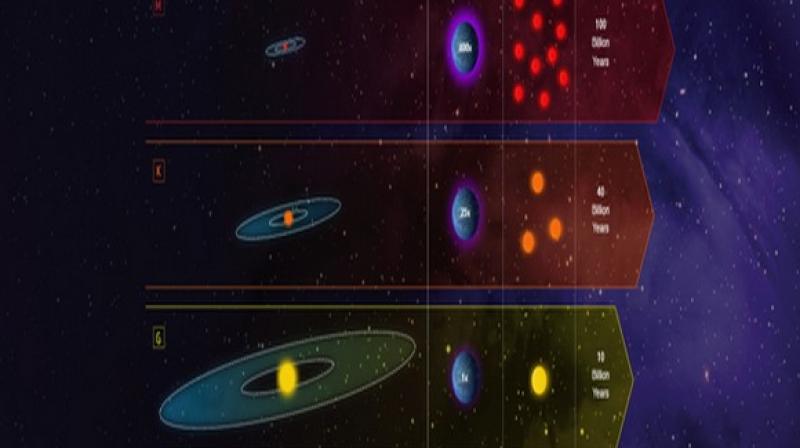 Stars that are slightly cooler and less luminous than the Sun are classified as K dwarfs, are the 'Goldilocks stars', said researcher Edward Guinan.

Astronomers are looking for planets in the habitable zone of stars which is often called 'goldilocks zone' where temperatures are favourable for liquid water to exist on the surface of a planet.

The idea which has emerged is that there are stars called the 'goldilocks stars' which are not too hot, not too cool and most of all, not too violent to house life-friendly planets.

Stars that are slightly cooler and less luminous than the Sun are classified as K dwarfs, are the 'Goldilocks stars', said researcher Edward Guinan.

"K-dwarf stars are in the 'sweet spot,' with properties intermediate between the rarer, more luminous, but shorter-lived solar-type stars (G stars) and the more numerous red dwarf stars (M stars). The K stars, especially the warmer ones, have the best of all worlds. If you are looking for planets with habitability, the abundance of K stars pump up your chances of finding life," added Guina.

There are three times as many K dwarfs present in our galaxy as stars like the Sun. Around 1000 K Stars are present within 100 light-years of Milky Way Galaxy's Sun as the prime candidates for exploration. These orange dwarves live from 15 billion to 45 billion years. Contrastingly, our Sun, is already halfway through its lifetime which lasts for only 10 billion years.

The comparatively rapid rate that it has of stellar evolution will leave Earth largely uninhabitable within another one or two billion years.

This is because, after a billion or so years from now, Earth will be orbiting inside the inner or the hotter edge of the habitable zone of Sun, which moves outward with Sun growing warmer and brighter. This will lead to the desiccation of Earth as it loses its present oceans and atmosphere.

By the age of 9 billion years, Sun would have been swelled up for becoming a red giant having the capability of engulfing Earth.

More abundant red dwarf stars which are called M dwarf stars have longer lifetimes and appear to be hostile to life, despite their small size.

Planets that are present in the habitable zone of red dwarf which is comparatively narrow and close to the star, are exposed to extreme levels of UV radiation and X-ray radiation, which can be up to a thousand times more intense than what Earth receives from Sun.

"We're not so optimistic anymore about the chances of finding advanced life around many M stars," Guinan said.

K dwarfs generally do not have active magnetic fields that power strong UV and X-ray emissions and energetic outbursts and they, therefore, shoot off flares at a lesser frequency based on Guinan's research.

The sensitive ultraviolet-light observations of radiation from the hydrogen of Hubble telescope were used for assessing the radiation from about 20 orange dwarfs.

"Hubble is the only telescope that can do this kind of observation," Guinan said.

According to researchers, K dwarfs seem to be the ideal place to look for life, and these stars would give time to highly evolved life for developing on planets.

Over the Sun's entire lifetime which is 10 billion years, the K stars are known for only increasing their brightness by about ten to fifteen percent, which gives biological evolution longer timespan to evolve the advanced life forms as compared to that than on Earth.

Over the last 30 years, Guinan along with other researchers has been observing a variety of stellar types. Based on their studies, researchers have determined relationships among stellar age, rotation rate, X-ray-UV emissions, and flare activity. These data have been utilized to investigate the effects of high-energy radiation on planet atmospheres and possible life.