Cheyenne, the supercomputer, is three times faster yet three times more efficient than its predecessor, a machine called Yellowstone. 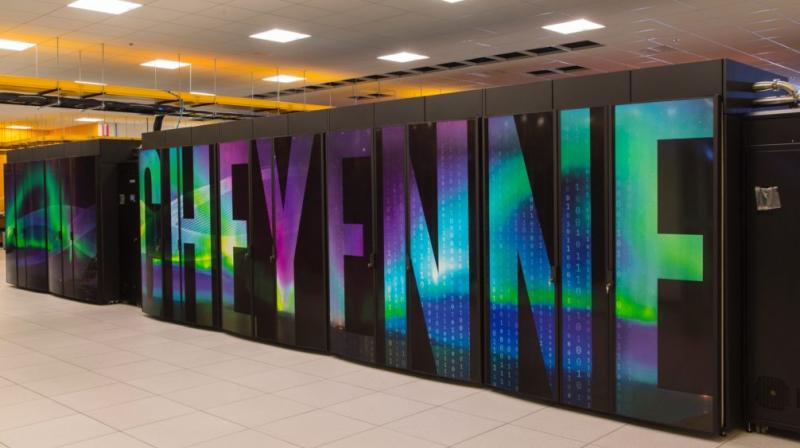 The new supercomputer named Cheyenne, is located at a National Center for Atmospheric Research facility on the outskirts of Wyoming's capital city.

One of the world's fastest supercomputers is helping scientists better understand the sun's behavior and predict weather months in advance but also got touted Tuesday as an important tool for diversifying Wyoming's economy, which has seen better days.

The new supercomputer named Cheyenne, located at a National Center for Atmospheric Research facility on the outskirts of Wyoming's capital city, is the world's 22nd fastest. Put to work earlier this year, Cheyenne is three times faster yet three times more efficient than its predecessor, a machine called Yellowstone.

The NCAR-Wyoming Supercomputing Center housing both machines is an important tool for recruiting tech businesses and keeping students interested in computers from leaving Wyoming to seek their fortunes elsewhere, Gov. Matt Mead said at a dedication for the new machine Tuesday.

The facility also is an important tool for research into hydrology, ways to trap carbon dioxide emitted by coal-fired power plants and other science important to Wyoming, he said.

"What it shows in Wyoming is that we're not only trying to broaden and diversify the economy, we care about the results," Mead said.

Wyoming produces about 40 percent of the nation's coal. In 2016, the U.S. coal industry had its worst year in four decades amid competition from cheaper and cleaner-burning natural gas as utilities' preferred fuel for generating electricity. Meanwhile, renewables such as wind and solar are increasingly competitive.

The coal downturn has hit Wyoming's economy hard. But the NCAR-Wyoming Supercomputing Center completed five years ago has helped attract other types of business including a Microsoft data center just across the street, Mead said.

Early work on the new supercomputer includes modeling of space weather - flares ejected by the sun that can affect satellites, communications and even the power grid. Scientists using the machine also are developing ways to better predict weather up to three months out, said University Corporation for Atmospheric Research President Antonio Busalacchi.

"This timescale is critical for businesses, agriculture and for our military, who need reliable forecasts of longer-term weather forecasts," Busalacchi said.

Cheyenne and Yellowstone will operate side-by-side until the National Center for Atmospheric Research retires Yellowstone later this year.