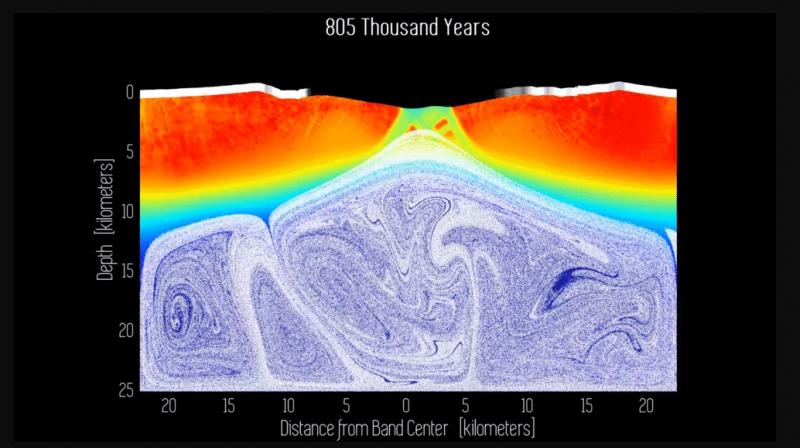 The scientists created an animation — a two-dimensional simulation of a possible cross-section of a band running through Europa's ice shell.

Deformation in the surface of Jupiter's moon Europa could transport subsurface ocean water to the icy body's surface, a study by NASA scientists has found. Scientists at NASA's Jet Propulsion Laboratory (JPL) in the US focused on linear features called "bands" and "groove lanes" found on Jupiter's moons Europa and Ganymede.

They have used the same numerical model to solve mysteries about motion in Earth's crust. The scientists created an animation — a two-dimensional simulation of a possible cross-section of a band running through Europa's ice shell. Bands on Europa and Ganymede are typically tens of miles wide and hundreds of miles long.

As the animation runs forward, the ice shell is deformed by gravitational interactions with Jupiter. The cold, brittle ice at the surface gets pulled apart. At the same time, faults in the upper ice form, heal, and re-form, NASA said.

The churning material that quickly fills the bottom half of the view is a collection of tiny white dots representing bits of Europa's ocean that have been frozen into the bottom of Europa's ice shell. The scientists describe it as "fossil" ocean material because the bits of ocean trapped in Europa's ice shell spend many hundreds of thousands, if not millions, of years being carried to the surface.

"In other words, by the time the ocean material reaches Europa's surface where it can be analysed by a passing spacecraft, it no longer serves as a sample of Europa's ocean as it is in the present," NASA said in a statement.

"Instead, the spacecraft would actually be studying Europa's ocean as it was a million or more years ago. Hence, it is fossil ocean material," it said.

NASA's Europa Clipper spacecraft is intended to launch in the early 2020s. The spacecraft will then orbit Jupiter and become the first spacecraft to study Europa exclusively, including the composition of the moon's surface material.