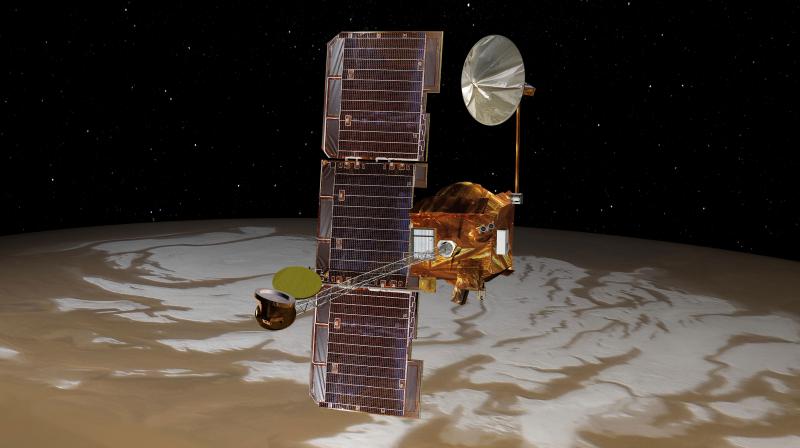 Researchers combined visible-wavelength and infrared data to produce an image color-coded for surface temperatures of this moon, which has been considered for a potential future human-mission outpost.

NASA's Odyssey orbiter – the longest-lived mission to Mars - has taken the first look at Phobos, and produced a colour-coded image revealing surface temperatures of the Martian moon considered to be a potential future human-mission outpost.

Researchers combined visible-wavelength and infrared data to produce an image color-coded for surface temperatures of this moon, which has been considered for a potential future human-mission outpost.

"Although THEMIS has been at Mars for 16 years, this was the first time we have been able to turn the spacecraft around to look at Phobos," said Jonathon Hill, THEMIS Mission Planner.

"This half-moon view of Phobos was chosen because it allowed us to observe a wide range of temperatures on the surface," said Hill.

Phobos has an oblong shape with an average diameter of about 22 kilometers. Cameras on other Mars orbiters have previously taken higher-resolution images of Phobos, but none with the infrared information available from THEMIS.

Observations in multiple bands of thermal-infrared wavelengths can yield information about the mineral composition of the surface, as well as the surface texture. One major question about Phobos and Mars' even smaller moon, Deimos, is whether they are captured asteroids or bits of Mars knocked into the sky by impacts. Compositional information from THEMIS might help pin down their origin.

Since Odyssey began orbiting the Red Planet in 2001, THEMIS has provided compositional and thermal-properties information from all over Mars, but never before imaged either Martian moon.

The observation was completed to validate that the spacecraft could safely do so, as the start of a possible series of observations of Phobos and Deimos in coming months.